We had this yummy New England Fish Chowder for dinner last night.

Although it was delicious, you can't really call it traditional New England fish chowder because I didn't use bacon and opted to add in carrots and celery!

I haven't made fish or clam chowder very often.

It's one of those things I usually ask Mom to make for me when I visit.

But yesterday, for some reason, I got a hankering for a steamy bowl of the stuff and decided to give it a whirl.

After consulting the 1959 version of The Fannie Farmer Boston Cooking School Cookbook (my mom's version) and still affected by Jamie Oliver's base soup recipe from his Food Revolution Cookbook, I took to the kitchen prepared to create a New England fish chowder of my very own.

And this is what I came up with. 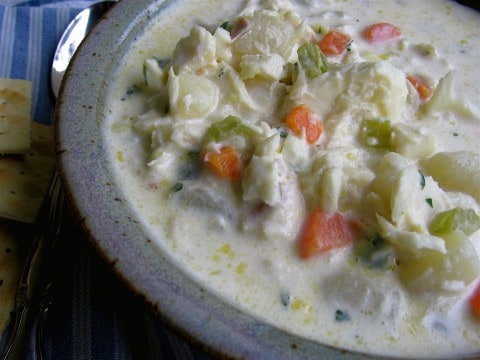 I decided to stick with the basics. Most old-time fish chowder recipes, including the one I consulted, call for just the most basic ingredients - firm white fish (such as haddock), potatoes, bacon or salt pork, onion, milk or cream, salt, pepper and butter.

No flour for thickening.

These can all be great additions, but I wanted the simpler kind of chowder I grew up with.

I decided to forgo the bacon and use olive oil instead.

And I felt like a few more vegetables couldn't hurt, so I added 2 stalks of diced celery and 2 peeled and diced carrots with the onions and diced potatoes.

Mom often makes her fish chowder with evaporated milk, which is very common in Maine. I added a touch of cream for added richness.

The result was a fish chowder, I'm proud to call my own.

How Many Calories and WW Points in this Fish Chowder?

According to my calculations, each generous 1-cup serving has about 325 calories and:

Chowder is improved if you make it one day and serve it the next, although I've never had the discipline not to indulge immediately. I like to make a big enough batch to enjoy for a couple of day. 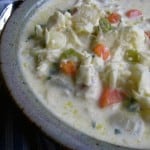 Cooking Tip: Chowder is improved if you make it one day and serve it the next, although I've never had the discipline not to indulge immediately. I like to make a big enough batch to enjoy for a couple of day. Serving size: 1 cup Click here to see your WW PersonalPoints for this recipe and track it in the WW app or site. 9 *SmartPoints (Green plan) 8 *SmartPoints (Blue plan) 6 *SmartPoints (Purple plan) 8 *PointsPlus (Old plan)
Nutrition Facts
New England Fish Chowder Recipe Made Lighter
Amount Per Serving (1 cups)
Calories 325 Calories from Fat 109
% Daily Value*
Fat 12.1g19%
Carbohydrates 19.9g7%
Fiber 2.5g10%
Protein 3.8g8%
* Percent Daily Values are based on a 2000 calorie diet.
Course: Main Course, Soup
Cuisine: American
Keyword: fish soup, fish stew, New England chowder
Did you make this recipe?Mention @simplenourishedliving on Instagram and tag #simplenourishedliving - we love to see your creations!

Take a Peek at the Largest Seafood Festival in New England