Here's a recipe for corn and shrimp chowder, which is essentially a simple corn chowder recipe to which you add shrimp right near the end of the cooking.

When you are fresh out of simple supper ideas this quick easy recipe might just do the trick. 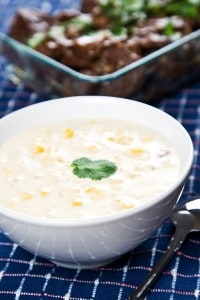 I think that hearty soups and chowders make some of the best simple suppers ever, especially when you add a salad and good warm bread.

This chowder calls for both a can of cream style corn and  a cup of whole kernel corn. Fresh corn, canned corn and frozen corn all work well.

Pour the water into a large soup pot. Add the onions, celery, pepper, carrot, potatoes and bay leaf. Bring to a boil and then lower heat and simmer gently until the vegetables are tender, about 20 minutes.

Add the shrimp and corn and heat, stirring occasionally, until the shrimp turn opaque, about 3 minutes.

In a bowl or measuring cup, whisk together the milk and flour. Add to the soup, stirring to blend well. Add salt and pepper to taste. Continue to cook, stirring often, until the milk is heated, but not boiling. Taste and season as necessary. Remove the bay leaf.

Serve the soup, garnishing each bowl with a a sprinkle of chopped parsley and paprika, if desired.