I've decided to ring out the year with this recipe for Slow Cooker Chicken Pasta Fagioli, since it's definitely feeling like soup season here in Phoenix.

Temperatures have dipped into the 50s during the day and 30s at night (brrrr) and Rod (along with several other members of the family who gathered together for Christmas) has come down with a nasty nasty cold. I've somehow managed to escape it so far and pray that my luck continues.

There's nothing like a bowl of steamy homemade soup, especially when you are under the weather. 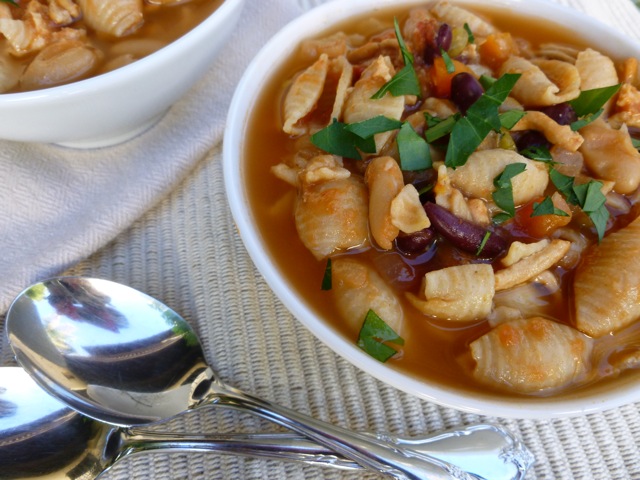 I ripped this recipe from a recent issue (not exactly sure which one) of Weight Watchers Magazine, which I adapted somewhat, using canned beans instead of dry, pasta shells instead of orechiette, and adding some carrots and celery.

Unfortunately, I failed to notice that the recipe called for way too much pasta (a whole pound) which totally absorbed all of the liquid.

This could have been avoided if I had checked out a couple other recipes - (something I usually do) for comparison - like this pasta fagioli from SkinnyTaste or this Crockpot Pasta Fagioli from A Year of Slow Cooking - which both call for a lot less pasta.

Fortunately, I was able to fix the situation by adding a lot more chicken stock, but I've modified the recipe here, cutting back the amount of pasta to 6 ounces or 1-½ cups, which also shaves off a couple WW Points too!

We really liked the flavor of this Italian pasta and bean soup. The fresh rosemary, thyme and bay leaves were the secret, I think.

How Many Calories and WW Points in this Crock Pot Soup?

According to my calculations, each generous 1-¼ cup serving of this chicken pasta fagioli has about 282 calories and

If you've made this Lightened Up Chicken Pasta Fagioli Soup, please give the recipe a star rating below and leave a comment letting me know how you liked it. And stay in touch on Pinterest, Facebook, Instagram and Twitter for the latest updates.

Watch this video from Lidia Bastianich to see how she makes traditional Pasta e Fagioli: