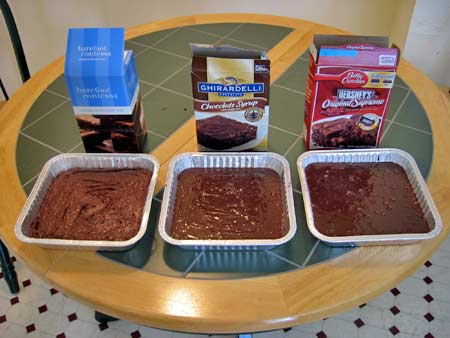 Which Brownie Mix Is Best?

When you don't have the time, ingredients, and/or inclination to make brownies from scratch which brownie mix should you choose?

Have you ever wondered which brownie mix is best?

There are a lot of differing opinions.

I thought it would be fun to have a boxed brownie tasting of our own.

When I was with my extended family over the holidays, I enlisted their help.

Since there were only nine of us, we limited our tasting to 3 of the top Cook's Illustrated rated brownie mixes.

The three mixes I chose for our informal tasting were:

We made the brownies according to their package instructions and baked them in 8-inch foil pans since we were on vacation with limited access to kitchen ingredients and equipment.

What Did I Learn From The Brownie Mix Tasting?
The one thing I learned from this taste test experiment is that taste is most definitely subjective. What one person deems "delicious intense chocolate" another calls "too chocolate". This is important information to remember when critiquing recipes.

With brownies there are no definites ~ some prefer a cake like texture, others, fudge like, some more chocolate flavor, some less. The key is to find/or adjust what works for your particular tastes. 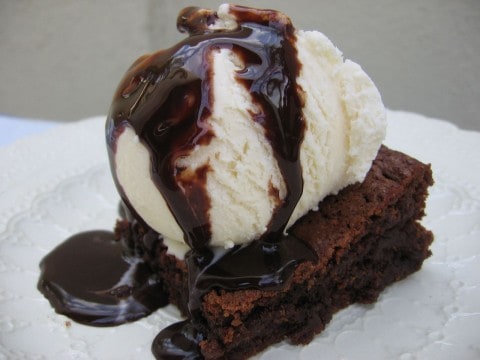 What Were The Results of Our Brownie Tasting?
The Barefoot Contessa Outrageous Brownie Mix won by a nose with the "most real chocolate flavor" and "most like homemade". Some felt these were too chocolate; too rich and too dense and fudgy. This mix was the most expensive of those we tested, but with high quality ingredients. If you want homemade tasting brownies with the convenience of a boxed mix and are willing to pay a little more, this is the brownie mix for you. It's available in upscale grocery stores and online.

Ghirardelli Chocolate Syrup Brownie Mix placed second. They were described as "just right," "better texture" and "less chocolatey" than the Barefoot Contessa's, which some thought was a good thing. Additional descriptors included "best chocolate flavor," "good chocolate flavor," and "well-balanced." At a price of $3.69, they are less expensive than the Barefoot Contessa Outrageous Brownies and available at most larger grocery stores.

Betty Crocker Supreme Brownies placed third. These brownies were described as "very chewy," "most moist," "good chocolate taste" "not chocolate enough," gummy texture," "most cake like," and "more sweet than chocolate." This box was on sale for $2.50 the day I picked them up at the market.

How Did These Findings Compare with the Folks at Cooks Illustrated?
They ranked Ghirardelli first followed by the Barefoot Contessa, Pillsbury (which we didn't sample) and Betty Crocker.

I still think my favorite brownie mix for the price is the Ghirardelli Chocolate Triple Chocolate Semi-Sweet Milk, Bittersweet Brownie Mix and will be sure to include them in my next brownie tasting.

The truth is, it's hard to go wrong with brownies. In my experience, most plates of brownies get devoured with gusto, whether from a box or from scratch. And conducting brownie tastings is a fun way to sample many different kinds of brownies at once with less guilt, since it's all in the name of food science!

If you prefer brownies from the edges of the pan over those from the middle you'll want to check out the Baker's Edge Nonstick Edge Brownie Pan that creates brownies that all have edges.