I enjoy eating Indian food every once in a while.

But the thought of cooking it from scratch totally intimidates me.

Most of the recipes seem really complicated with long lists of unusual spices, like garam masala, that aren’t part of my pantry.

So, to keep things super simple, I decided to cheat and make an easy crock pot chicken tikka masala… 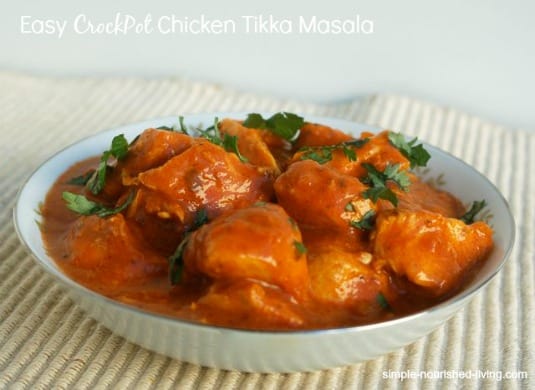 using a jar of Patak’s Tikka Masala Curry Sauce (affiliate link) that I had picked up on sale at World Market.

It’s all natural with a straight-forward list of ingredients and nothing artificial, which is nice. 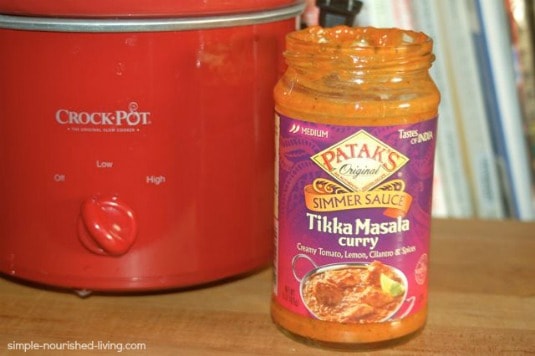 With only 2-ingredients, recipes don’t get much simpler than this easy crockpot chicken tikka masala.

Served with rice and peas, it makes a yummy quick-fix Indian meal with minimal effort.

The sauce is mildly spicy, with rich tomatoey flavor. Rod, Mom and I all thought it was good.

If you want, you can stir in a little 2-3 tablespoons of yogurt, sour cream or coconut milk at the end to make the sauce a little creamier and less tomatoey.

Or bulk it up with vegetables (onion, cauliflower, potatoes and/or peas) like the brilliant Martha C. suggests in her comment below 🙂

According to my calculations, each serving has about 229 calories and *4 Weight Watchers Freestyle SmartPoints. Enjoy!

If you’ve made this Slow Cooker Chicken Tikka Masala, please give the recipe a star rating below and leave a comment letting me know how you liked it. 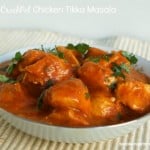 If you want, you can stir in a little 2-3 tablespoons of yogurt, sour cream or coconut milk at the end to make the sauce a little creamier and less tomatoey. A little chopped fresh cilantro would be nice too.   Next time, I'll consider seasoning the chicken with a few spices first.   This sauce would be good with shrimp, potatoes, peas and/or cauliflower too.   Weight Watchers PointsPlus: *6 Weight Watchers SmartPoints: *5 Weight Watchers Freestyle SmartPoints: *4
Nutrition Facts
Easy Crock Pot Chicken Tikka Masala Recipe
Amount Per Serving (3 /4 cup)
Calories 229 Calories from Fat 90
% Daily Value*
Fat 10g15%
Carbohydrates 6.9g2%
Fiber 1.6g6%
Protein 25.7g51%
* Percent Daily Values are based on a 2000 calorie diet.
Course: Main Course
Cuisine: Indian
Keyword: easy chicken tikka masala
Did you make this recipe?Mention @simplenourishedliving on Instagram and tag #simplenourishedliving - we love to see your creations!

If you would prefer to make crockpot chicken tikka masala from scratch, here are some recipes that you might want to consider: