I love how the new Weight Watchers Beyond the Scale Plan has provided the nudge I needed to mix things up in the kitchen.

I can see now that I had become stuck in a rut, especially where breakfast is concerned. 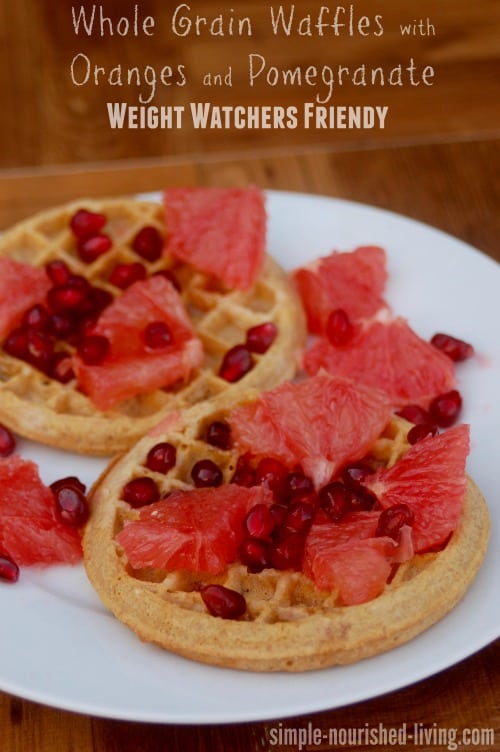 So instead of defaulting to one of my long-standing go-to breakfasts, a couple of mornings this week I enjoyed whole grain waffles with oranges (or grapefruit) and pomegranate.

Alongside a mug of steaming coffee, it was a healthy delicious way to begin the day.

The inspiration for these whole grain waffles with oranges and pomegranate came from a new cookbook, Weight Watchers Year Round Fresh, that I picked up at a recent WW Meeting. Arranged by season, it’s brimming with recipes I can’t wait to try and/or simplify.

The Skinny on Whole Grain Waffles with Oranges and Pomegranates

This is a recipe that I chose to simplify.

The original calls for made-from-scratch buttermilk waffles, a no-starter for me on a weekday morning; or any morning really. I don’t own a waffle iron and have no desire to get one.

These days I’m all about simplifying life in the kitchen, not complicating it.

So, I opted for frozen whole grain waffles that have been lingering in the freezer since I made this skinny strawberry waffle shortcake.

If you’re inspired to make homemade waffles, go for it. I’m sure they’d be wonderful.

As luck would have it, I didn’t have oranges either, so used a sweet and juicy ruby red grapefruit instead.

Drizzled with a little maple syrup, these waffles were a treat. And all for just 284 calories, *7 Weight Watchers PointsPlus, *7 SmartPoints.

Watch this video demonstration from Stephanie at JoyofBaking as she makes her own waffles from scratch:

If you like this easy breakfast recipe, be sure to check out my other Weight Watchers friendly recipes including WW Microwave Apple Pancake Puff, Make Ahead Omelet Muffins, Cottage Cheese Power Pancakes, Classic WW Cottage Cheese “Danish” and Baked Pumpkin Donuts. 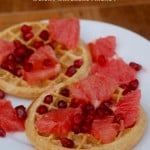