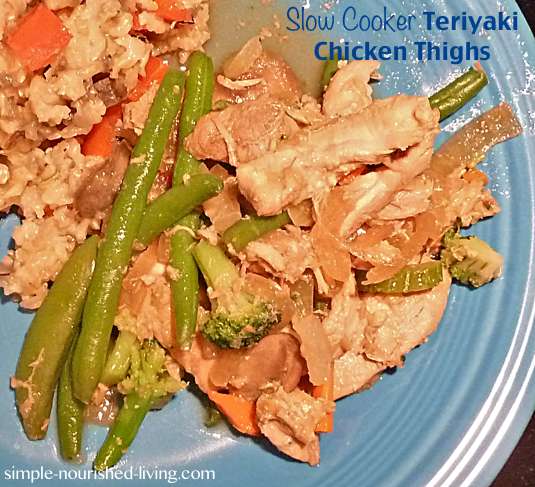 Since I've been chatting a lot with Martha about how beginner cooks (like myself) can get comfortable with crock pot cooking, I've decided to try out a recipe for slow cooker teriyaki chicken thighs. We are continuing to brainstorm the idea, but as with most things in life, you just gotta get in there and learn from your mistakes.

I think my ultimate personal goal is to get comfortable enough with cooking in general (whether using a crock pot or not), so I will not have to necessarily rely on following recipes step-by-step for everything I want to make. I think the term Martha used to describe this was intuitive cooking.

One of the first dishes that caught my eye was this recipe for slow cooker teriyaki chicken thighs that I found in a little magazine put out by Prevention. (We're not trying to "prevent" anything, but we do try to eat on the healthier side.) This particular magazine is called Slow Cooker So Easy - 33 No-Fail Recipes - perfect for us newbie cooks. This recipe looked interesting because it didn't have too many ingredients and had a serving size of 4 - ideal for a dinner for two with some leftovers. 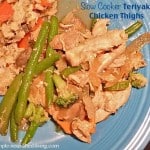 Nutritional Estimates Per Serving (¼th): 292 calories, 12.5 g fat, 11 g carbs, 2.5 g fiber, 32 g protein and *7 Weight Watchers Points Plus *I often use fresh ginger paste that comes in a jar instead of dealing with peeling and chopping fresh ginger. You should be able to find it in the Asian section of larger grocery stores. Or you could substitute a teaspoon of ground ginger instead.
Did you make this recipe?Mention @simplenourishedliving on Instagram and tag #simplenourishedliving - we love to see your creations!

I think my prep time took a little longer than it would for a more experienced cook. Slicing the onion and finely chopping the ginger was a little time consuming, but not too bad. I know I'll get faster with more experience - isn't that the way life works? Plus, I'll probably learn some shortcuts along the way.

Will be serving this chicken dish with Martha's Crock Pot Wild Rice recipe. Obviously I've never made rice in the slow cooker before, but it seems like too much work to make it on the stove top, so I figured I'd give it a shot.

Some questions that came up for me as I was pulling these dishes together:

How Much Did Making Slow Cooker Chicken Teriyaki Thighs Cost?

Due to some recent major life changes, we are needing to pay more attention to our spending habits.  In the past we'd stop at Whole Foods after work (every day!!) and pick up some ready-made meal. Needless to say, for a family of two, we were spending way more money on food than was necessary. But with our busy lives, we opted for the easy way out instead of planning our meals and cooking more at home.

Now though, we'll be cooking more at home and I'm excited to try and turn this into a game and see how much money we don't have to spend on food - yet eat well. For us that means not so many processed foods and mostly healthy, whole foods.

I was pleasantly surprised to walk into Fry's Marketplace today and find they were having a major sale on chicken. I could have planned this better had I read the store circular, but I haven't really gone too far down that road yet. Anyway, the sale was buy 1 package of chicken (breasts or thighs) and get 2 free (of equal or lesser value)! So, I picked up two packages of boneless thighs and one package of boneless breasts figuring that the two I'm not using today could go into the freezer. My first step in have a well stocked pantry and refrigerator/freezer!

So, with that major coup on chicken savings, this is how the pricing for this meal breaks down:

So, the grand total for this delectable dish of wild rice was about $7.08. And the recipe says it serves 5, so that totals about $1.42 per serving.

The grand total for this ginger-almond chicken came out to about $9.95. And the recipe is supposed to make 4 servings, so that's just under $2.49 per serving.

All this cooking and tracking of spending is still new to me, but at first glance, the cost of this meal (not to mention the per serving price) is much more appealing than my previous habit of dropping about $30+ at Whole Foods for a prepared meal that we just had to heat up to enjoy.

Now don't get me wrong, I love the food at Whole Foods, but spending that much money on a daily basis (and for a single meal, dinner) just wasn't very economical.

How Did We Like Slow Cooker Teriyaki Chicken Thighs?

Both Neal and I liked the meal, but there is definitely some room for improvement.

I must have done something wrong with the rice, because even after cooking for more than 4 ½ hours on LOW, it was still too wet. It wasn't really mushy, but it seemed like there was still too much liquid left. I guess I need to check in on it sooner and perhaps turn it to HIGH for a bit?

Or maybe, use a little less chicken broth next time? I am quite sure I measure out 2 ½ cups exactly, but maybe I was off. On the bright side, we both liked the flavors and it was still very edible 🙂 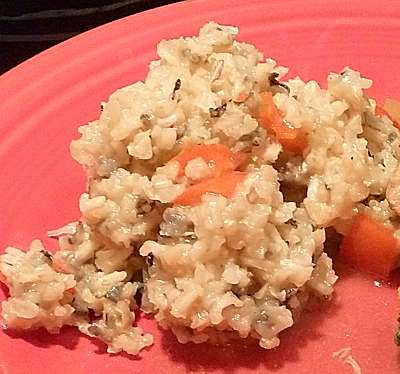 I also goofed a little with the chicken. It's only supposed to cook for about two hours (or until the chicken is cooked) and then another 20-30 minutes after adding the vegetables. After getting it prepared and turning it to LOW, I was good and remember to check it after an hour. However, we had some work being done at the house yesterday and unfortunately I got distracted and sort of lost track of the time. I panicked a little because I went back to check it after (gulp, 4 hours) and luckily there was still a lot of the sauce left and the chicken really didn't dry out too much - maybe just a little. So, I actually turned it off then because I wasn't ready to add the vegetables just yet.

I am happy to say that the chicken was very tasty and only maybe a little dry, which is cool especially after I really overcooked it (according to the recipe). As Martha has mentioned to me more than once, crock pots are very forgiving and a good way to learn how to cook. 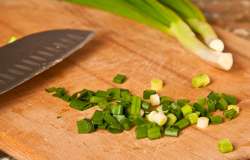 Halfway through dinner, I told Neal to stop eating. He said, "what's wrong." I said, "this is is supposed to be ginger-almond chicken, and I forgot to add the almonds (and green onion)." I think I was so excited to serve up my first meal, that I forgot to include the final two ingredients. Luckily the almonds and green onion just get stirred in right before serving, so they were easy to add. And surprisingly, each added a nice new twist to the flavors of the dish. 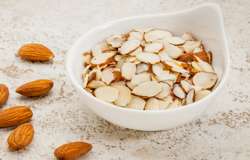 Overall, we liked this meal of  slow cooker teriyaki chicken and wild rice and I learned a lot about using my slow cookers. I of course learned that I have many more questions too. But, the most important take-away is that I finally got out of my own way and made a semi-successful slow cooker dinner 🙂