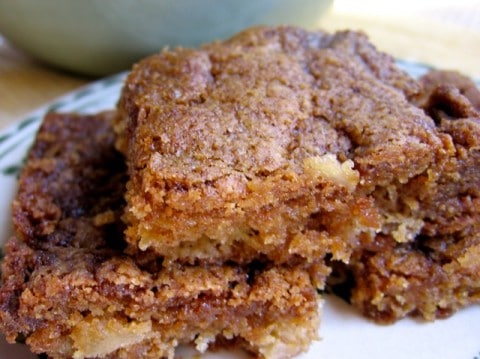 If you’re like me and love apple desserts, I hope you give these simple apple brownies (AKA apple nut bars) a try.

The Skinny on Apple Brownies

I made only a couple of changes – using white wheat flour instead of all-purpose flour and decreasing the butter by half, which results in a slightly lighter and healthier apple brownie that, I believe, tastes as good as the original.

Although, the original recipe title is for “Apple Brownies,” since these days most of us automatically associate ‘brownies’ with chocolate, a more appropriate name might be “Apple Nut Bars.”

I adapted this old-fashioned apple brownies recipe from one of my favorite old cookbooks, Cooking Down East (affiliate link) by Marjorie Standish, who has been called the Julia Child of Maine.

Her book is a collection of recipes for the kind of simple home cooking I grew up eating and am more drawn to with each passing year.

According to my calculations, each serving of these apple brownies has about 147 calories, *4 Weight Watchers PointsPlus, *6 Freestyle SmartPoints.

I hope you like these skinny apple brownies as much as we do. Enjoy!

If you’ve made these apple brownies, please give the recipe a star rating below and leave a comment letting me know how you liked it. 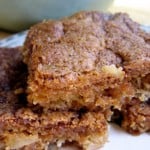