Here's two of my favorite shrimp soup recipes - A spicy crab and shrimp soup that I first made in the early 1990s and a great sausage and shrimp gumbo soup. If you're looking for easy shrimp recipes for dinner, these two soups are hard to beat.

I love hearty soups for lunch, and dinner/supper (whichever you prefer to call it) and have a growing collection of delicious easy soup recipes. They're easy, healthy and delicious and have a way of leaving you feeling satisfied instead of stuffed.

Did you know that the evening meal in France, which is typically lighter than the midday meal, is called 'souper?'

During the past couple of years we've begun to adopt this way of eating too, enjoying soup for dinner (supper) at least a couple of times a week. It's a great way to eat less easily and naturally.

There's something so nourishing and satisfying about soups. They're joyful to make and to eat! And they're really difficult to screw up - even for beginning cooks. 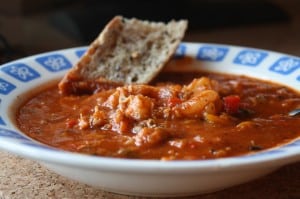 This is one of my favorite shrimp soup recipes. I clipped it from a cooking magazine - I don't even remember which one - sometime back in the early 1990s when I was living in northern California and have made it repeatedly since. It's definitely a keeper so it's nice to have it here where I will always be able to locate it.

This is definitely a main dish soup perfect for a casual dinner or supper with family or friends. Serve it with a simple green salad and really good crusty French bread.

Place the butter in large soup pot set over medium heat, and stir occasionally until it melts. Add the onion and celery and cook, stirring often, until they are tender, about 6 minutes.

Add the clam juice, tomatoes, tomato juice and sherry and bring to a boil. Once it is boiling, add the barley, Worcestershire sauce, oregano, garlic powder, hot sauce and cayenne pepper. Reduce the heat and allow the mixture to bubble gently, stirring often, until the barley is tender, about 25 minutes.

When the barley is tender, add the shrimp and crab and simmer until the shrimp are cooked through, about 3 minutes. Season to taste with salt and pepper.

Another wonderful hearty main dish shrimp soup recipe that works as a great meal-in-a-bowl soup for lunch, dinner or supper. It's adapted from The Perfect Recipe for Losing Weight and Eating Great

by Pam Anderson. It's a great book for people who want to lose weight while enjoying delicious food, the way she did.

Place the oil in a soup pot or Dutch oven and heat it over medium-high heat. Add the onion and cook, stirring often, until it turns golden brown, about 5 minutes.

Add the green pepper, celery, broth, tomatoes, thyme, cayenne pepper, sausage, okra and rice to the pot. Bring the mixture to a boil and then reduce your heat to low and place the lid on the pot so it's partially covered. Allow the soup to bubble gently, stirring occasionally, until the vegetables and rice are tender, about 20 minutes.

When the vegetables are tender, turn off the heat. Stir in the shrimp and hot sauce, if using. Cover the pot and let stand to allow the shrimp to cook and flavors to blend until the shrimp turn opaque, about 5 minutes. Season to taste with salt and pepper.