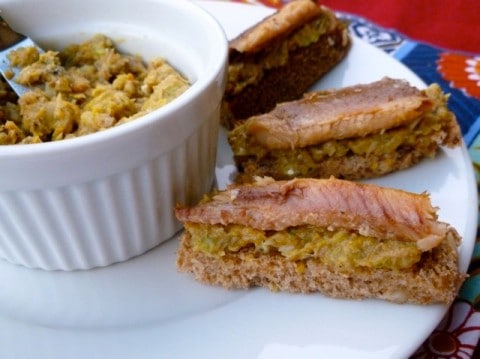 I chose to make these simple sardine toasts for this month’s Recipe Redux’s “Sea What You’ve Been Missing” challenge in honor of my maternal grandmother who lived to be 93-years-old and who regularly ate all kinds of fish (fresh, smoked, salted, and canned) including sardines.

“Was this one of the secrets of her longevity?” I wonder.

She grew up in Lubec, Maine, the easternmost town in the contiguous United States, where she once worked in a sardine factory that has long since closed.

What are sardines? Small, oily fish related to herrings, canned packed in everything from spring water, olive oil and soybean oil to mustard sauce and hot sauce. Few other fish are as healthful (with a whopping 1,950 mg of omega 3’s per 3 ounces – more than salmon and tuna – and lots of vitamin D), sustainable, or affordable, so it’s definitely worth experimenting with canned sardine recipes to uncover a few that work for you.

Okay, sardines are NOT mild fish. They’re fishy fish, like anchovies. An acquired taste. A relic from the Depression-era that appears to becoming a culinary trend in some circles, according to this Wall Street Journal article. (Nana would find this development very amusing, indeed!) 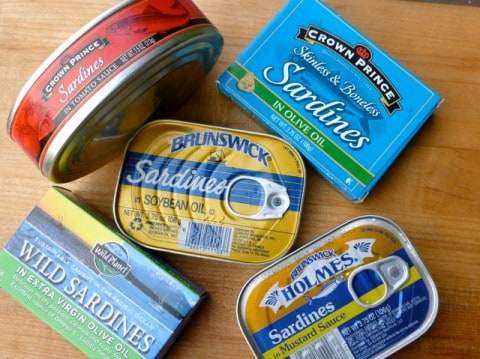 I came across several “fancy” recipes calling for canned sardines, including one for spaghetti with sardines, broccoli and cauliflower that is on my list of recipes to try soon. But spaghetti and sardines is not something my Maine-born-and-raised grandmother would have ever made. (Growing up we most often ate sardines straight from the can on- or alongside saltine crackers.)

, is something she would have enjoyed. To make it healthier, I substituted the butter called for with olive oil and swapped minced scallion for onion. 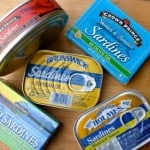 A simple sardine mixture spread on toasts, topped with a whole sardine and broiled till warm. If you can't find cans of tiny sardines, check out the instructions in the "Notes" section.
Servings (adjustable): 6

Nutritional Estimates Per Serving: 76 calories, 3.5 g fat, 6.0 g carbs, 5.0 g protein and 2 Weight Watchers PointsPlus Value The small sardines called for in this recipe can be hard to find. Alternatively, use 1/2 of a 4-5 ounce can of sardines to make the spread and top the toasts with pieces of the remaining sardines. It won't quite look the same, but will be just as tasty.
Did you make this recipe?Mention @simplenourishedliving on Instagram and tag #simplenourishedliving - we love to see your creations!