Are you looking for easy slow cooker jambalaya recipes?

I've got two great jambalaya recipes one for chicken jambalaya and the other for shrimp jambalaya that both cook in your crock-pot (affiliate link).

You may be wondering what is jambalaya exactly?

Well, jambalaya is a classic creole rice dish that was originally made with ham. (Jamon is the Spanish word for ham.) These days you'll see all kinds of variations including sausage jambalaya, chicken jambalaya and shrimp jambalaya. It's one of those recipes that can be made the way you like it.

If you prefer, this is my favorite recipe for easy jambalaya made on the stove along with a healthy jambalaya. 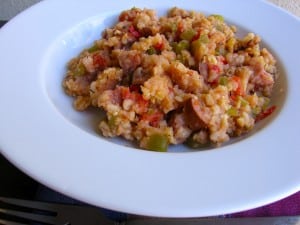 , by Phyllis Pellman Good. With 1400 recipes, it's the first, last and only slow cooker cookbook you'll ever need.

I've made some adjustments to this easy slow cooker chicken jambalaya to suit our tastes. The original recipe called for adding the rice along with all the other ingredients, but I found cooking it this way resulted in a mushy dry dish, so I prefer to add the rice during the last hour of cooking. (If you prefer, you can cook the rice separately, and then add it to the slow cooker during the last 10 minutes of cooking, just so it has a little time to absorb some flavor without risking getting mushy.)

The recipe calls for 1 pound of boneless skinless chicken breasts cubed, but I prefer to use boneless, skinless thighs.

Stir everything except the rice together in your slow cooker. Cover and cook on high 3 to 4 hours or on low 6 to 7 hours. Stir in the rice  during the last hour of cooking. (Alternatively, cook the rice separately and then add it to the slow cooker during the last 10 minutes.)