Are you looking for a great easy shrimp jambalaya recipe?

This recipe for jambalaya with shrimp is both easy and delicious.

I first fell in love with the flavors of Louisiana cooking during my first trip to New Orleans decades ago.

It was so different from what I had grown up eating in Connecticut as a kid - so flavorful and not nearly as spicy as I had expected. (Later I learned that Cajun dishes tend to be more spicy than creole cooking, although I enjoy them both.)

If you've enjoyed jambalaya out at restaurants, but never tried to make it yourself, you are in for a treat.

And if you've ever wondered how to make jambalaya - a favorite creole rice dish - you'll be amazed at just how quick and easy it is.

This quick easy one dish dinner that can be made in just a little over 30 minutes. 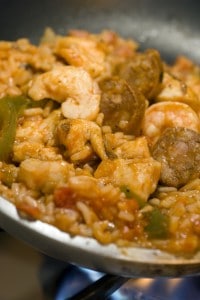 Jambalaya was originally made with ham. It's name comes from the Spanish word for ham - jamon. Today you will find jambalaya made with ham, sausage, chicken, shrimp or in various combinations.

Traditional creole jambalaya would include first making a roux - a combination of fat and flour cooked until deep caramel brown. This easy recipes skips that step to keep things quick and easy.

If you love the flavors of creole cooking, I hope you give this easy dinner recipe a try. If you prefer, here's an easy slow cooker jambalaya recipe.

This easy jambalaya is a great one dish meal. Serve with warm French bread and a simple crisp green salad for to round out your meal.

In a large heavy pot, preferably a Dutch oven, cook the onions, celery, pepper in the oil over medium heat, stirring frequently, until golden, about 7 minutes.

Add the ham or sausage, rice, and cook, stirring often, until the rice is very lightly golden brown, about 5 minutes. Add the garlic, tomatoes, salt, cayenne pepper, thyme, parsley and water or broth and bring the mixture to a boil, stirring occasionally. Once the mixture begins to boil, lower the heat and adjust it as you need to to keep it at a gentle simmer. Cover and simmer, until the rice is almost done, 20 to 25 minutes.

Add the shrimp, pushing them well down into the hot mixture, cover and simmer just until the shrimp are pink, 3 to 5 minutes.

Traditional Jambalaya - if you prefer a more traditional jambalaya.  Start by first heating the oil in the pan and then blending in 3 tablespoons of flour. Cook, stirring constantly until the mixture turns a rich brown color. Then add the onions and garlic and proceed with the recipe as written.

Chicken Jambalya - if you prefer to make chicken jambalaya instead of shrimp, stir in 2 to 3 cups cooked chicken when you add the tomatoes.