Have you ever wished you could enroll in a Slow Cooking 101 Class?

Recently I received an email from my brother, Peter, and after talking with him about it, decided to share it with you here.

He raises a lot of questions and has a pretty deep interest in what I am doing here on Simple Nourished Living.

We have decided to start an ongoing dialogue with him raising questions, comments, concerns, new information that I haven't thought of or don't know about (all around the topics of cooking, eating and living happy, healthy and slim) - in hopes that you would find it helpful.

As a result, we've decided to begin with a "Slow Cooking 101 with Peter" series of posts to help him begin crock pot cooking with confidence. 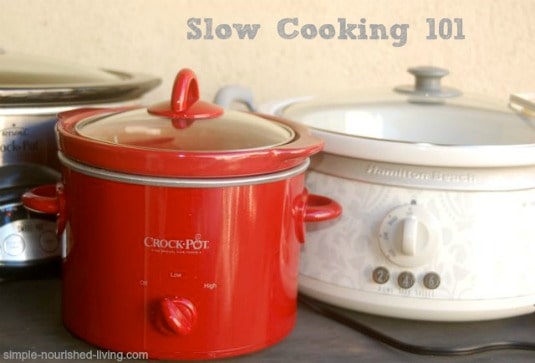 The email that launched Slow Cooking 101 with Peter

I've been really interested in most of the topics you have been writing about on SNL since you first started it way back in December 2007, but your recent idea to challenge yourself to use your crock pot every day for a year has really been fun to follow.

And it got me thinking... I would like to participate somehow - but of course I have some questions and concerns.

How do I begin? I have only used a crock pot once, so am not exactly sure where (or how) to get started. I obviously need to go pick one up, but am not exactly sure which one is right for my situation (or even if there is such a thing as "the right crock pot"). So I guess it then makes sense to explain what exactly it is I am trying to accomplish. There's a lot to this one, but it all boils down to:

I'd like to lose a few pounds. As you know I am not overweight, but I am 44 and have a regular desk job so I don't get as much exercise as I would like and have a few extra pounds (mostly around my belly) that I'd like to try and get rid of. I don't have a scale, so it's not like I am trying to reach a certain weight, I just want to feel more comfortable with myself, which I don't right now.

I'd like to save money on food. We are a family of two, my partner Neal and myself, and we have similar work schedules during the week which don't allow a lot of time for cooking, or planning, weekday meals.

As a result, I go out to lunch way more than I prefer and therefore and spending more money than I'd like, so I'd like to work on trying to get this under control.

This also applies to dinner. We tend to stop at the store on the way home from work and pick up prepared foods from the deli counter at Whole Foods - which in-and-of-itself isn't bad - but we are both spending way too much on dinner for a family of two and we tend to eat the same things over and over (or rotate through a few different things), but it gets boring and sometimes I don't even feel like eating (even though I am hungry) just because it's the same thing again.

I'd like more variety in our meals. I can cook, but again, tend to make the same things over and over, so I am hoping that learning how to cook with a crock pot will give me a little more flexibility around mealtime.

The only thing I've ever made in a crock pot was chicken soup, so needless to say I was amazed when I saw that you were making things like apple cake, pumpkin pie pudding and pizza!

I actually thought that the only things a crock pot was good for was soups and stews - I honestly didn't know just how flexible (and forgiving according to you) that it could be.

I think it would be fun to try baking and making desserts in the slow cooker. I really enjoy baking, but with my busy schedule, usually just choose to not take the time to actually do it. Seeing that it is possible with a crock pot just might get me interested again.

Do you think you can help me? Right now, I am interested in doing my own crock pot experiment and was hoping for a little guidance and direction from you to help get me started, a sort of "Slow Cooking 101."

I don't necessarily expect everything will change for the better as a result, but even if I could just spend a little less money at the grocery store each week and learn how to cook some new things to add some variety to our meals, that would he a huge accomplishment and enough to encourage me to keep trying new things.

Let me know what you think. 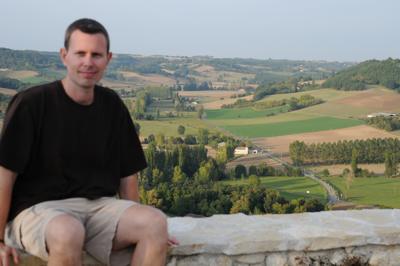 My Response to Peter's Email regarding Slow Cooking 101

I love the idea of assisting you with your desire to begin using a crock pot to help with your goals of:

3) Adding more variety to your lunches and dinners

I think we should call what we are doing, "Slow Cooking 101 with Peter."

To begin, you'll need to invest in a slow cooker. So, what I think I need to do next is put together a post that talks about "How to Choose a Slow Cooker" which I'll make a priority.

Then once you have purchased one, what I'd like to suggest is that you begin using you slow cooker on Sundays to make one or two things that you could then warmup for quick and easy lunches or dinners during the week.

I can provide recipe options. Or you can search the web and cookbooks, for recipes you want to try and I'll answer any questions you might have.

How does that sound?