I love eggplant, so when I noticed this relatively easy looking recipe for Stuffed Eggplant in Prevention's Slow Cooker So Easy! magazine, I knew I wanted to try it. 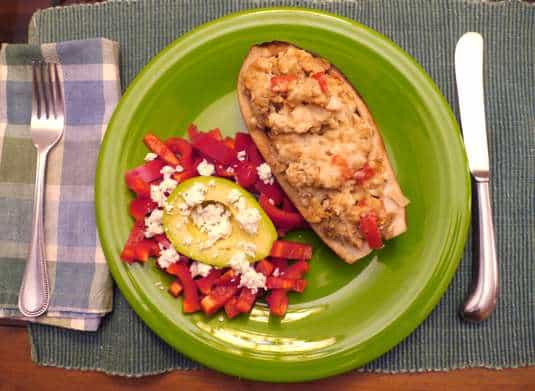 I still don't feel very skilled at using my crock pot, but for some reason this particular dish jumped out at me as sounding delicious and looking not too difficult to prepare.

In fact, now that it's been cooking away for almost two hours, I can honestly say that once again, the prep time is still what slows me down the most.

There's not too much chopping required, but you do have to brown the turkey - along with the onions, peppers and chopped eggplant - in a skillet before stuffing the eggplant, and then letting the slow cooker take over and do it's thing.

I think it took me about 30-40 minutes before I was stuffing the eggplants and putting them in the crock pot to cook away. I'm guessing a more skilled cook could reduce this time significantly. But, I'm still learning and had the time available, so I'm ok with it.

How Many Calories and WW Points in this Stuffed Eggplant?

According to my calculations, each serving has 321 calories and:

If you've made this Crock Pot Turkey Stuffed Eggplant, please give the recipe a star rating below and leave a comment letting me know how you liked it. And stay in touch on Pinterest, Facebook, Instagram and Twitter for the latest updates. 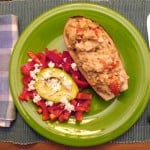 We had this slow cooker stuffed eggplant for dinner tonight along with a simple salad of chopped red bell pepper, fresh avocado and some garlic & herb goat cheese with a little drizzle of Newman's Balsamic Dressing.

The eggplant smelled wonderful coming out of the crock pot, and while I was happy with the taste, I felt like it was missing something. Neal suggested perhaps a little more seasoning would have been good.

I think that I would definitely make this again, but I would not make it according to the recipe, I would try to adapt it somehow.

The eggplant was very tender and tasted good - overall it just felt like something was missing.

I'll definitely follow up with Martha to see if she has any suggestions because it seems that Martha has the uncanny ability to read a recipe and tell you how it will taste. That's a very handy skill in my book and something that's probably impossible to teach 😉

Pete, your slow cooker stuffed eggplant looks great. I love how you're experimenting and trying new recipes. Cooking, like so many things in life, can only be learned by doing.

Tasting and Seasoning are Essential

I think learning to taste and season your food is an essential kitchen skill.

Everyone's tastes are different. And a recipe made exactly as written, will rarely be as good as it can be. Most recipes will need to be "tweaked" with seasonings to accommodate your particular taste buds.

Salt and pepper are two basic seasonings that can go a  long way to improve most any dish. It's incredible to me that they are not included in this recipe's ingredients list.

My approach to cooking, tasting and seasoning

Reading Peter's comments and then looking at the recipe, I realized that if I were making this slow cooker stuffed eggplant, I would have automatically added salt and pepper as I was cooking the turkey and vegetables. Then I would have tasted the mixture  before stuffing, adding more salt and pepper, if I felt it needed it. And if I thought the stuffing still seemed bland, I would've tried to kick it up a bit.

Pete's instincts are spot on.  Additional spices - cumin, cinnamon, and cayenne - might work. As might marinara sauce and/or sundried tomato pesto. Or possibly a little salsa or diced tomatoes?

It's really about experimenting and "tweaking" your recipes. The key is to add your additions slowly, tasting between additions. When you're cooking it's best to add seasonings a little at a time so you don't end up with too much, a much trickier problem to fix.

Do you have any suggestions for how you might season this slow cooker stuffed eggplant? We'd love to have you share your ideas in the comments.

Cost of Making Slow Cooker Stuffed Eggplant - Only $2.80 per serving