Recently the idea to make a spinach and artichoke dip soup popped into my head and I decided to go with it.

If you love spinach artichoke dip, I think you’re going to love this soup. 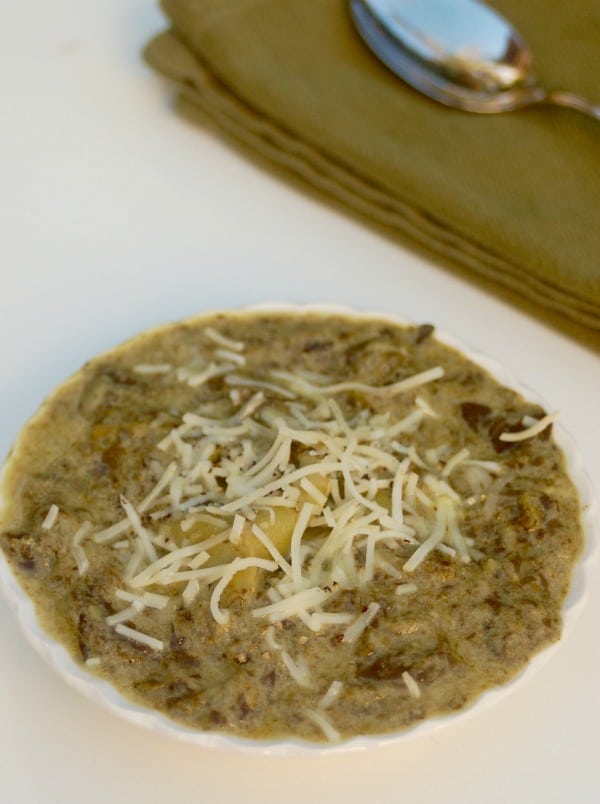 It’s got all the goodness of the classic dip turned into a lighter, healthier soup, with the added benefit of pasta!

And just 5 ingredients. What’s not to love?

Then I poured in a jar of light alfredo sauce and vegetable broth (affiliate link).

To make it heartier and more comforting, I stirred in a package of fresh spinach cheese ravioli at the end.

Tortellini would work well too, but it wasn’t an option at my grocery store the day I shopped.

For simplicity’s sake, I made this skinny soup in my slow cooker, but you could cook it on the stove top in a lot less time if you wanted.

As I was creating this soup, I realized there were lots of ways it could be modified which I’ve provided in the variations below.

Both Rod and I thought this was a real winner, so it’s one I plan on making again during soup season.

If you’re less concerned about calories, the addition of some cream cheese or Boursin cheese at the end is worth the splurge.

vegetarian/vegan – use vegetable broth (affiliate link). Instead of alfredo sauce, puree a can or two of white beans in your blender (affiliate link) and stir them in along with a teaspoon of garlic powder.

no frozen artichoke hearts? – use drained canned instead

different pastas – tortellini, shells, elbows, penne, etc. would all work.  (If you use dry pasta, cook it before adding to the slow cooker)

In this video, Rachel Ray shows how to make a lightened up lemony spinach artichoke soup: 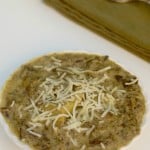 To make this spinach artichoke dip ravioli soup, I used: