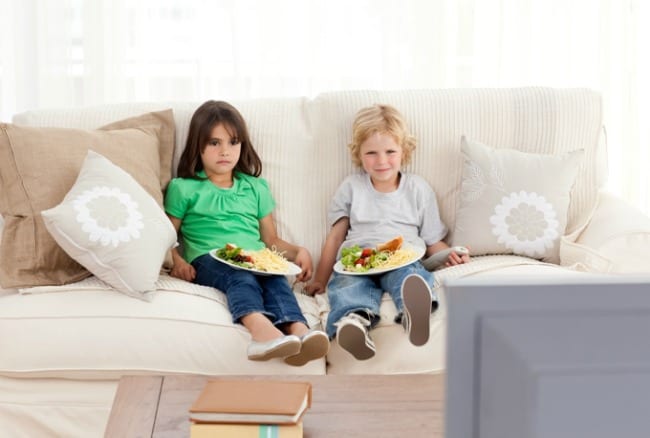 Would you be willing to turn of the TV to lose weight?

All the research confirms that people who watch a lot of TV are more likely to be overweight than people who don't. The less TV you watch, the skinnier you are. Seriously!

Related: Mindless Eating: The Book That Helped My Lose Weight & Keep it Off for Good

According to Elizabeth Somer, in 10 Habits That Mess Up a Woman's Diet, TV watching slows our metabolism more than any other activity except sleeping. It also exposes us to way too many junk-food commercials that can lead to snacking and binge eating. Have you ever stopped to count the number of food commercials appearing during an hour of television? It's mind boggling.

More than 90% of us report watching TV when eating meals at home (Mindless Eating), which is really dangerous, because anything that takes our focus off the food makes us more likely to overeat without knowing it. When you think about it, TV is a triple eating threat. First, it leads us to eat. Then it leads us to not pay attention to how much we eat because we are too busy tuning into the show and then it causes eat to eat for too long!

University of Massachusetts researchers found that people who watched TV during a meal consumed 288 more calories on average than those who didn't. People who cut their TV time in half consume 100 fewer calories a day, on average. That's a pound every 35 days, just for watching less TV!

I used to be one of those people who regularly ate in front of the TV while watching my favorite shows, many of them on The Food Network. (What was I thinking?) Watching less TV to lose weight seemed like such an easy, doable thing to try. So for the past several years I have worked to wean myself from it. I still backtrack from time to time, but it's getting easier. Like most anything it's a habit. And with practice we can change our habits.

What do you think? Is it something you would be willing to try?

10 Habits That Mess Up a Woman's Diet
Mindless Eating: Why We Eat More Than We Think