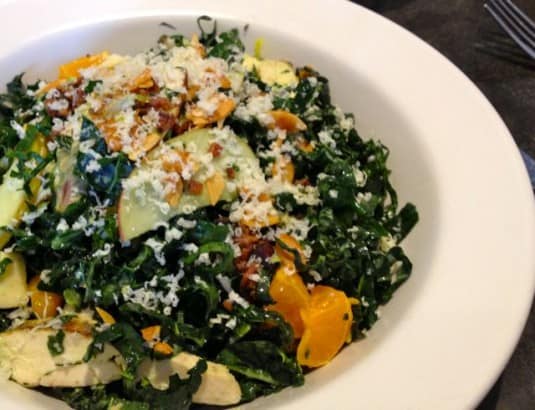 Eating Out on Weight Watchers: The Henry's Kale Salad.

Instead of celebrating Mother's Day Sunday we waited until Monday when we could all gather for lunch. We met at The Henry, one of the newer restaurants in Sam Fox's ever-expanding restaurant empire (located at the corner of 44th Street and Camelback).

Like any good Weight Watcher, I scoped out the menu online ahead of time. Billed as "simple, yet hearty" featuring appetizers, salads, sandwiches and entrées as well as breakfast selections on Saturday and Sunday, there's something for everyone.

I opted for The Henry's Kale Salad. A recent  review in Phoenix Magazine had said:  "On the salad side, the kale and apple salad ($10) stands out. The mix of chopped kale, thinly-sliced McClendon's apples, chunks of Amish cheddar, pieces of clementine, bacon bits and toasted almonds bound by a lemony vinaigrette was light and refreshing."

I added grilled chicken to make it a little more filling.

The rest of the family ordered an assortment of dishes including pasta, salad, sandwiches and burgers with fries. None of which tempted me, though I did have a bite of Rod's tortellini,  and Mom's corned beef which were both yummy 🙂

The Skinny on The Henry's Kale Salad

I thought the kale salad's combination of flavors and textures was light yet satisfying. What was even more surprising was how much Rod, my former salad hating husband, liked it. He kept reaching over to grab another forkful and finished off the bit that was left when I was done.

The Henry doesn't post nutritional information so there's no way to know for certain, but I'm guessing from the amounts and mix of ingredients that the salad has somewhere around 400 calories or 10 Points Plus.

How do you handle tracking when you eat out at a place that doesn't provide nutritional details?

Since we were celebrating Mother's Day, we ordered a couple desserts for the table: croissant bread pudding and blueberry buttermilk pie. Satisfied after the salad, I was able to stick to having "just a taste" of each which made my taste buds very happy. I thought the bread pudding was the better of the two and definitely splurge-worthy.

If you liked Eating Out on Weight Watchers The Henry's Kale Salad: