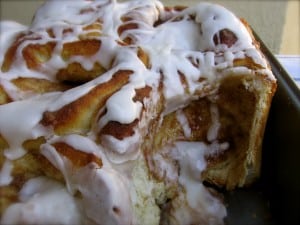 Always on the lookout for delicious easy recipes I was intrigued when I discovered this cinnamon rolls recipe that called for frozen bread dough, instead of homemade.

Last winter while living in northern Wisconsin I did a side-by-side comparison of homemade cinnamon rolls.

Since skiing, snow-shoeing, and ice fishing aren't my thing, I spent a lot of time cooking and baking.

It was the perfect way to stay warm and lift my spirits with the powerful scents of sugar, cinnamon, and vanilla.

In my side-to-side comparison I made two different cinnamon rolls recipes - one using frozen bread dough and the other homemade dough from scratch.

While the homemade dough created slightly more tender cinnamon rolls my husband and I agreed that the difference wasn't great enough to justify the additional time and energy, especially for busy cooks on the lookout for easy cinnamon rolls recipes.

I made these easy cinnamon rolls again a few days ago, letting them rise in the refrigerator overnight and baking them first thing in the morning as soon as the oven was preheated.

They were a luscious way to boost the blood sugar and thoroughly enjoyed by my family and house guests.

Roll the dough out on a lightly floured surface until it is approximately 12x9 inches in size. Spread the dough with melted butter and cover with sugar and cinnamon mixture. Roll up like a jellyroll beginning with the short side. Pinch the seam to seal and place the seam side down. Cut into 9 equally sized rolls and place in the prepared pan cut side up. Sprinkle any filling that escaped over the rolls.

Cover with plastic wrap and let the cinnamon rolls rise until 1.5 to 2 times their original size, about 30 to 40 minutes. Alternatively let them rise in the refrigerator until almost doubled (up to 12 hours) and remove from the fridge while the oven preheats.

Bake the pan of cinnamon rolls at 350F for 25-30 minutes, until they are golden browned and puffed. Let them cool briefly and then spread or drizzle with icing.

« One of the Best Pasta Salads Ever
Food You Crave »