I made this cheap and easy tossed salad for lunch today. It’s my first attempt in a long time at really tuning into my spending and what it costs to eat healthy.

Here’s a simple chart outlining what I spent on ingredients:

Which means that according to my calculations, it cost me about $1.33 to make two large servings of this cheap and easy tossed salad or $.67 cents per serving.

And only *1 Weight Watchers PointsPlus or *2 WW Freestyle SmartPoints!

Why this sudden interest in my food budget?

It all began with this post on Snack Girl where Lisa interviewed a 26 year old from Great Britain who had just completed an experiment living on $18 worth of healthy food for one week.

He got the idea from a BBC article which had suggested that “it’s possible to live on as little as £12 (about $18) a week on food alone, but estimated the cost of doing so to be double that amount, due to a lack in our nation’s culinary skills.”

Somehow that led me to this Arizona SNAP Challenge website, where you can sign up to take part in a challenge the first week of September to live on the average food stamp allowance of $4/day for 5 days.

Which got me thinking about the 1940s Experiment blog, where Carolyn has put herself on a diet of 1940s UK wartime rations in an attempt to lose 100 pounds and led me to this interesting article that explores how a modern British family got healthier when they volunteered to go back in time and spend nine weeks surviving on austere rations for the series The 1940s House.  All the adults lost weight and showed modest health improvements by the end of the experiment.

All this reading forced me to face the fact that I’m spending way too much money on food, all under the guise of doing it for my health and weight maintenance. It’s time to get my budget under control. I’m spending more than I’m making, which is never a good thing.

My grandmother, who lived through the depression and World War II, stayed frugal forever in all aspects of her life, including what she spent for food. Was this part of the secret to her long life?

For quite some time I’ve had a strong sense that the key to lasting health and weight loss is inextricably linked to our past and it’s simpler recipes and smaller portions. To what and how we cooked, ate and lived. And I’m not talking about the trendy, distant, caveman/paleo past, but the more recent, less trendy, past of our great-grandmothers and grandmothers.

So, I’m beginning today, by paying attention and limiting my spending to what I need instead of what I want. It’s time to get real. Get frugal. Get thrifty. I think Nana would be proud! 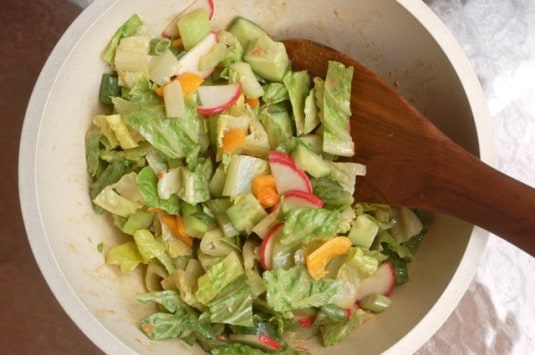 According to my calculations, half of this simple green salad has about 84 calories, *1 Weight Watchers PointsPlus, *2 WW Freestyle SmartPoints.

If you’ve made this green salad, please give the recipe a star rating below and leave a comment letting me know how you liked it. 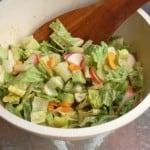 31shares
Previous Post: « Confession: I Talk to Myself A LOT to Stay on Track
Next Post: Nigella Lawson’s Low Carb Chicken Teriyaki Recipe »