For me baked stuffed shrimp is forever connected with memories of happy times.

This best of the baked shrimp recipes was a special dish reserved for holidays and celebratory dinners in fancy restaurants with white tablecloths when I was growing up. 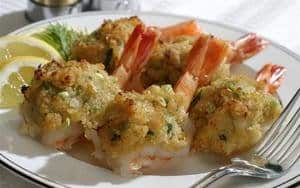 It's a classic recipe that we don't see on restaurant menus enough any more, so the best solution is to begin making it at home again.

You'll be surprised at how surprisingly easy this baked shrimp recipe is to make.

The success of baked stuffed shrimp is dependent on using really fresh colossal shrimp and a deliciously rich stuffing. Colossal shrimp may be labeled U-12 which means there will be fewer than 12 shrimp (usually about 9) in a pound.

There are so many variations for baked stuffed shrimp stuffing, it can be hard to decide, but for me, the key is the crumbs.

The perfect stuffing for baked stuffed shrimp should include crushed butter-flavored crackers, such as Ritz. I also prefer stuffings that include seafood, but if you don't just leave it out.

This baked shrimp recipe hails straight from Down East Maine, where my parents grew up. It's adapted (slightly) from a great old cookbook, called  Cooking Down East

, by Marjorie Standish, that was first published back in 1969 and is chock-full of old Maine recipes.

This stuffing includes scallops, but if you prefer you can leave them out.

Preheat your oven to 350 degrees F.

Cut a slit on the inside curve of each shrimp without cutting all the way through. Press open like a book to butterfly them. Place them in a baking dish in a single layer, cut side up and then set aside while you make the stuffing.

Combine the cracker crumbs, potato chips, butter and scallops in a mixing bowl. Add just enough milk to make a light and fluffy stuffing. Season with a little salt and pepper if desired.

Bake until the shrimp has turned opaque and is cooked through and the stuffing is browned, about 20 minutes.

, published in 1988 to benefit the American Cancer Society Connecticut Division. It's full of great local recipes and peppered with obscure historical tidbits that are fun to read. (Did you know that in 1902, the first time a President of the Unites States ever rode in an automobile was August 22, 1902, when President Theodore Roosevelt took such a ride in Hartford.)

The stuffing calls for tiny shrimp and crabmeat, but if you prefer you can use an alternative or leave it out.

Preheat oven to 375 degrees and butter a baking dish large enough to hold the shrimp in a single layer.

Butterfly the shrimp by cutting almost through from the back and opening them like a book. Pat dry with paper towels and set in a buttered baking dish in a single layer, cut side up.

In a large bowl mix together the remaining ingredients. Generously stuff the shrimp by placing it on top of them and pressing extra stuffing in and around the dish. Bake until the stuffing is nicely browned and the shrimp are opaque and cooked through, about 20 minutes. 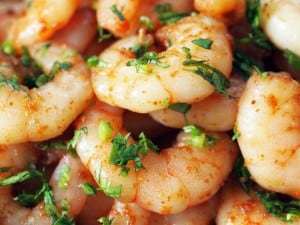 Heat the oven to 425 degrees. Combine the lemon juice, cajun seasoning, parsley and cayenne pepper in a medium bowl and mix well. Add the shrimp and toss to coat. Arrange shrimp in a single layer in a 9x13-inch baking dish coated with cooking spray. Dot with butter.

If your looking for another tasty baked shrimp recipe full of the flavors of Greece, you'll want to check out this deliciously easy recipe for Greek Style Baked Shrimp Scampi - shrimp baked with tomatoes, garlic and feta cheese.

More Recipes for Baked Stuffed Shrimp from Around the Web