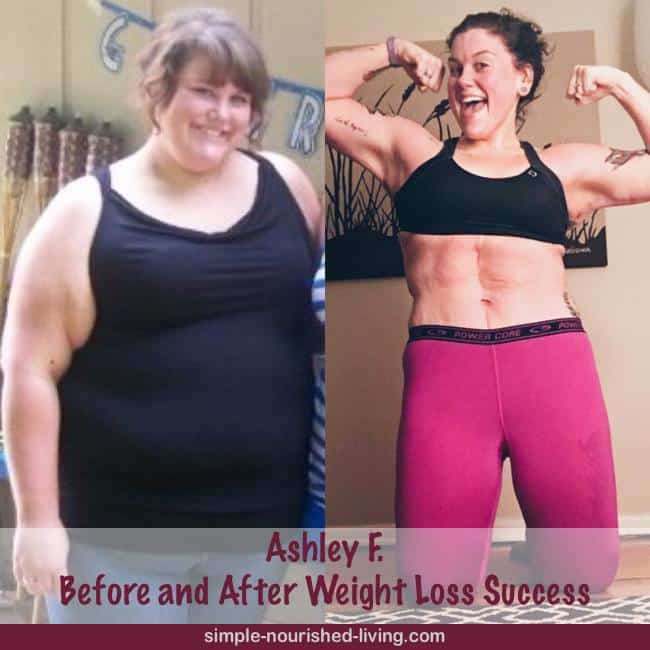 I'm honored to introduce Ashley and share her inspiring weight loss story with you today. Ashley demonstrates what it takes  to transform a desire into a goal by committing to the work.

I'm so glad she shared her desire to join Weight Watchers and that her pastor and his wife provided her the financial and spiritual jumpstart she needed.

Now she gets to pay it forward with her mission to share her story with the world and to show everyone and anyone who will listen that they can do ANYTHING their heart desires.

Take it away Ashley...

Tell Us A Little Bit About Your Weight Struggle
Hello, my name is Ashley. Since early childhood, I have been overweight, obese, and eventually became morbidly obese.

Weighing in at 357lbs, almost 3 years ago, I was told by my doctors that if I didn't lose weight that I would soon be diagnosed with diabetes, would have to remain on high blood pressure medication for my entire life, would continue to struggle with asthma, and wouldn't be able to have children.

I truly felt like my quality of life was slim to none. I was slowly killing myself and was very quickly losing my entire future.

Something inside of me WOKE UP. I had the deep desire to join Weight Watchers but didn't necessarily have a good enough job to afford the monthly payment. So it began merely with a desire in my mind and one I shared with some friends on Facebook.

I posted a status one day about wanting to be a Weight Watchers member, and how I deeply desired to get my life on track. That following Sunday, my pastor and his wife pulled me aside after church and told me they believed that I could do great things and what I was capable of losing the weight.

They donated my first six months of membership to me right then and there. The check already written. I was so shocked. These people had THAT much faith and belief in me… If that was the case then maybe I REALLY could do this!

I joined Weight Watchers and over the course of 2 years lost 147 pounds naturally. All by eating right and exercising.

I have maintained my weight for a little over a year and am now ready to start slowly losing again.

My doctor has now told me that I am no longer at risk for diabetes, my asthma is gone, I'm off of all medications, and I should be able to have children naturally with no issues.

It's my passion now to share my story with the world and to show everyone and anyone who will listen that they can do ANYTHING their heart desires.

I never thought I would be this person I am today, but here I am! All because someone believed in me. And I believe in you.

My highest weight was 357lbs and I am now 215lbs. 🙂 Happier and healthier than ever!

What Was Your Wake-Up Call Or "A-Ha Moment" That Caused You To Sign Up With Weight Watchers?
When my doctor told me I was pre-diabetic and might not be able to have children if I continued my lifestyle the way it was at the time. My health scares were a huge wake up call for me, and I'm so glad that they motivated me to become a healthier person!

How Have Your Eating Habits Changed Since Weight Watchers? What Did You Eat Before And What Are You Eating Now?
What's mostly changed is PORTIONS. I used to literally eat an entire box of pasta by myself. Yeah....NOT the wisest thing to do! Now I have cut out many refined carbs, and switched to whole grains only, and eat a LOT more veggies now!

What Is The Difference In Your Fitness Before Weight Watchers And Now?
Before Weight Watchers, the word "fitness" was not in my vocabulary. I never worked out, never liked doing anything physical. Even climbing the stairs seemed like a chore. And NOW I work out 5-6 times a week (sometimes multiple times a day) because it literally fuels my life! I am so beyond passionate about being healthy and having a solid fitness regimen in my life. It's like my therapy!

What Has Been The Biggest Change/Payoff For You So Far?
WHERE DO I BEGIN!?! My health, for starters. I can be a mom one day now! That was something that was hugely jeopardized prior to Weight Watchers. But now I'm healthier than I've ever been and it feels great! (Also being able to feel my hip bones and collarbones… I NEVER thought that would be a thing!!!!!)

How Much Weight Have You Lost? How Long Did It Take You To Lose It?
Roughly 147 pounds lost over the course of 2 years (+1 year of maintaining)

You were made for greatness. You have a beautiful and powerful and amazing body (regardless of the number on the scale), and that body is capable of doing some pretty amazing things if you allow it to.

Just allow it. You were made for greatness. Be great!