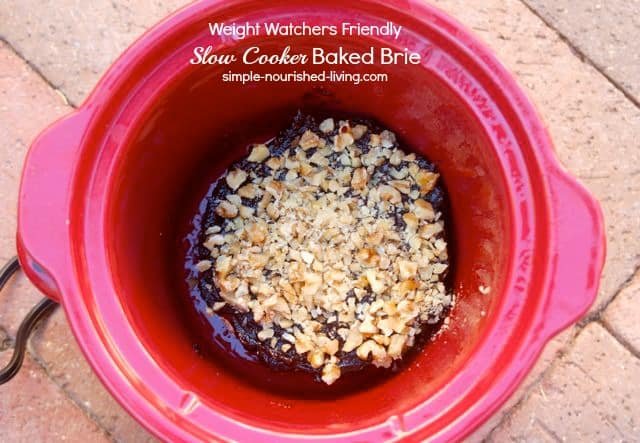 I made this slow cooker baked brie yesterday. It was the perfect accompaniment to a glass of wine, while relaxing on the patio. And a wonderful way to start the weekend.

(I love this time of year in Phoenix. We are finally able to open the doors and windows and be outside again 🙂

Now more than a month of into my Year of Weight Watchers friendly crock pot cooking, a rhythm is starting to emerge.

Fridays are becoming my day to try out slow cooker appetizer recipes that serve to tide us over until heading out for a late dinner or warming up some of the leftovers that have accumulated during the week.

I topped this slow cooker baked brie with a layer of fig preserves and handful of chopped walnuts and let it cook on LOW till warm and gooey. Then served it with slices of apple and a few Triscuits. (Slices of baguette would have been nice, but not worth the trip out to the store.)

I think this slow cooker baked brie is a perfect way to spend some of those extra Weight Watchers weekly points, don’t you?

I’m already making a list of the other slow cooker baked brie toppings to try. Next up is chopped apricots, apricot preserves and almonds. And definitely chopped dried cranberries and pistachios before the Holidays. 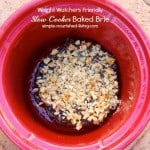