We've got something a little different today. Peter and I are beginning to experiment with video.

Sometimes it feels easier for me to talk about a topic than to write about it.

That was the case a while ago when he suggested I share my Weight Watchers Story with you. Because it's kinda long, he's broken it down into 3 separate videos and included transcription for those who prefer reading to watching.

While my story might not be as dramatic as some, I think it's representative of what a lot of us struggle with as we work to resolve our issues with food and weight. And it helps to illustrate why I'm forever a fan of Weight Watchers.

I hope you find it helpful.

Martha: "So I high-tailed it back to California where I knew nobody really, and I checked the Yellow Pages - it would have been the Yellow Pages back then - and found a Weight Watchers location and immediately went and signed up. And that was my first experience.

I learned a tremendous amount in a really short time about nutrition, about portion control, about the fact that I was just way eating too much. As much as I'd like to deny it. And so many of us are in the world because the portions have gotten so big.

I did Weight Watchers vigilantly. I showed up to meetings week after week. I slowly and steadily lost the weight which is what Weight Watchers suggests. And after about 9 months I lost 30 pounds. I was at a goal weight that I felt really incredible about. I felt good about myself. I felt confident.

At that time Weight Watchers has a great option for once you've lost your weight. Once you lose the weight and then you maintain your weight loss for 6 weeks, then they tell you that you're now a Lifetime Member.

It's great because it's really setting you up for a lifestyle to maintain your weight. Because now, 20+ years later, I can attest to the fact that while losing weight is hard, I am gonna say that keeping the weight off is even harder. So I achieved this lifetime status, and I should have kept going to meetings.

If I could go back, if I had one piece of advice that my 51-year-old self could tell my 28-year-old self, it would be to keep going to the meetings. Keep checking in. Keep weighing in. Because life is difficult. And it's better to just nip it in the bud. But I didn't. I was cocky. I thought, I got this. I can check weight loss off my list. I'll never have this struggle again.

So I stopped attending the meetings. I slowly reverted over time to my old behaviors - I think a lot of people who have lost weight and gained it back again can share this experience. I put the weight back on, slowly and steadily and not all of it.

Again, I don't know why I didn't think well just go back to Weight Watchers. I continued to play with different diets. So I can't tell you how many diets I've been on in my lifetime. If you name a diet, I've tried it - Atkins, Pritkin, Somersize, Slimfast - you know I've tried them all. I've read a lot of the diet books. 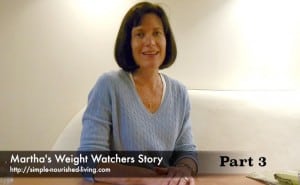