It never occurred to me before to try and create a cantaloupe smoothie recipe, but they've been on sale at my local grocery store, so I figured why not give it a shot?

Plus, as the weather heats up here in Phoenix, this type of experimentation will give me more ideas for creating new, ice cold smoothie recipes. The perfect beverage for those sweltering summer days in the desert. 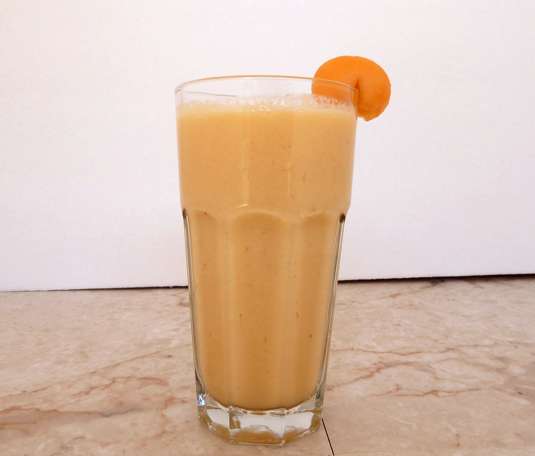 According to Wikipedia, the cantaloupe was first grown in Iran about 5,000 years ago!

I did not know this, but I also learned on Wikipedia that the outer surface skin of cantaloupes can contain harmful bacteria (i.e. Salmonella), so you should always completely scrub them before cutting and eating.

And once cut and refrigerated, you should eat any leftovers within three days - then plan to toss out any melon you have that is still around after 3 days. Even though it's refrigerated, it's apparently still at risk for developing bacteria.

On the bright side, cantaloupe is a great source of vitamin C and vitamin A 🙂

I tried to keep this smoothie simple and not go overboard (as I tend to do sometimes) with ingredients. I've said it before and I'll say it again - making smoothies is really fun, and easy. Especially with my Vitamix. And so, I have to really restrain myself (sometimes) from continuing to add new ingredients while blending. It's an honest effort though to try and get the taste right!

Plus, you really can't mess up a smoothie recipe because if you go too far in one direction, you can always counter it by adding something else.

In creating this recipe, I started off with the intention of keeping it to 5 ingredients or less. And I think I succeeded. Almost 😉

I did want to keep it simple though because my number one goal was to make sure the flavor of the cantaloupe came through. 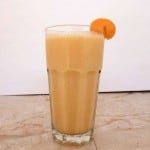 I initially wasn't going to add a banana to this cantaloupe smoothie recipe, but it just wasn't creamy enough with just the mango, yogurt and cantaloupe. I could have probably added more mango, but I decided to add half a banana instead.

For my taste, this smoothie didn't need any additional sweetener - the banana, mango and cantaloupe provided enough natural sweetness.

I believe that cutting and freezing a perfectly ripe cantaloupe will give you ingredients for a future smoothie that is very creamy. But I didn't want to wait a day for my cantaloupe chunks to freeze, so I used fresh cantaloupe and just added some extra ice when blending.

If you're interested in more cantaloupe smoothies, we've scoured the web and come up with some of the best recipes to share with you here. 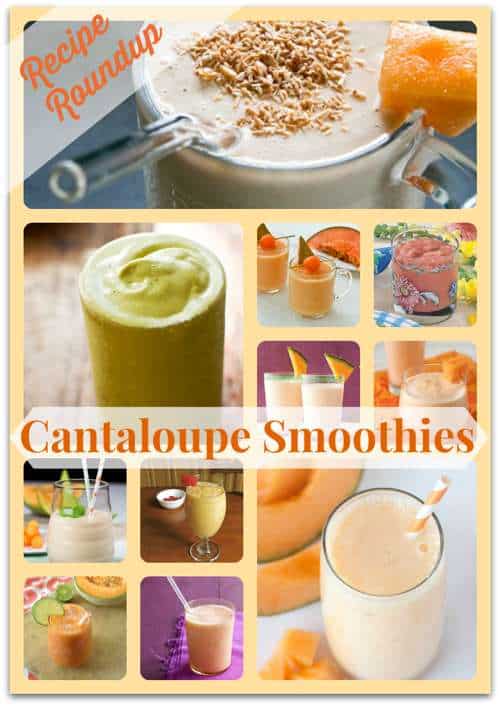 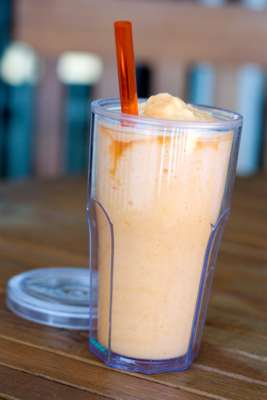 Refreshing Cantaloupe Smoothie From Aggie's Kitchen
This refreshing smoothie recipe has only 4 ingredients - a clementine or small orange, cantaloupe, banana and ice. As Aggie mentions, you may need to add a little water or juice if your citrus isn’t very juicy - great advice Aggie! 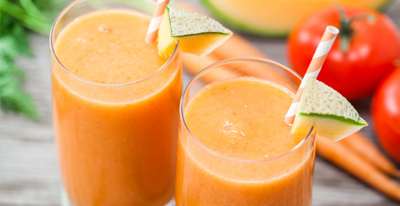 Cantaloupe Veggie Smoothie from BlendTec
This nutritional powerhouse packs a punch with loads of both vitamin A and vitamin C and only costs about *2 PointsPlus per serving. 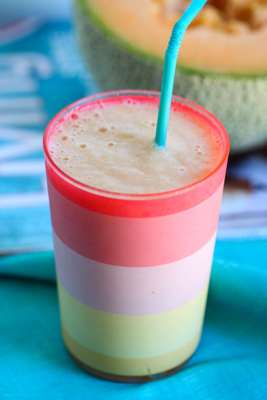 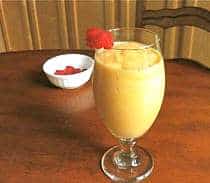 Cantaloupe Smoothie via The Spruce Eats

Cantaloupe Orange Smoothie from The Spruce Eats
Cantaloupe, orange juice, milk, vanilla yogurt and honey team up in this winning smoothie recipe. You can either freeze your cantaloupe chunks ahead of time, of if you're using fresh cantaloupe, just add some ice before blending to keep it chilled. 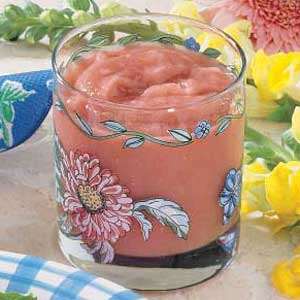 Cantaloupe Berry Cooler from Taste of Home (affiliate link)
This one sounds really good and is now on my must try list. Just blend up some cantaloupe, grapes, strawberries and ice for this refreshingly cool smoothie. Each ¾ cup serving is about *2 PointsPlus. 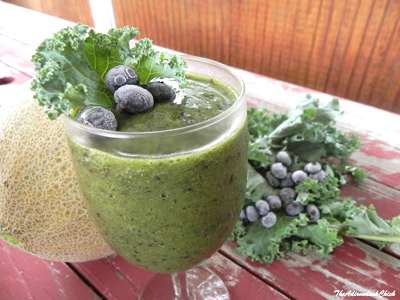 Single-Serve Kale Blueberry Cantaloupe Smoothie from The Adirondack Chick
You'll want to blend this up well to make sure the kale is well incorporated with the cantaloupe and blueberries. As Michelle suggests, you may want to add a little water (or coconut water) to reach your desired smoothie consistency. 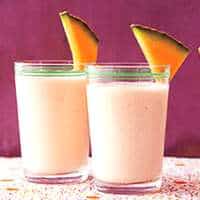 Cantaloupe Yogurt Smoothie from Rachel Ray Mag
Nothing but cantaloupe, Greek yogurt, honey and ice in this super-simple recipe. 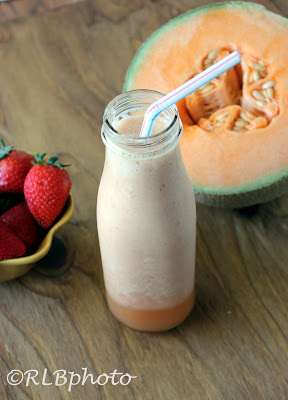 Cantaloupe Berry Smoothie from Curious Country Cook
Rayna blends cantaloupe with strawberries, a little orange juice, ice and honey (to desired sweetness) to make this smoothie. She also has a wonderful suggestion to pour this into Popsicle molds or small paper cups and then freezing to create your own cool summertime treats. 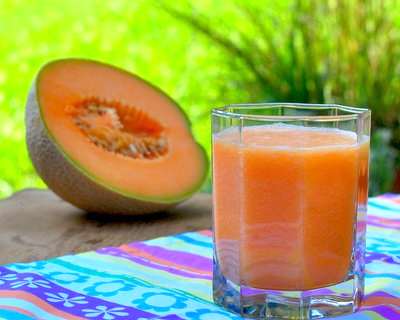 Creamy Cantaloupe Smoothie from Kitchen Parade
Alanna's got two creamy, 100% cantaloupe recipes to share, one chilled and one blended with the fruit at room temperature. Just *2 Weight Watchers Points per serving. 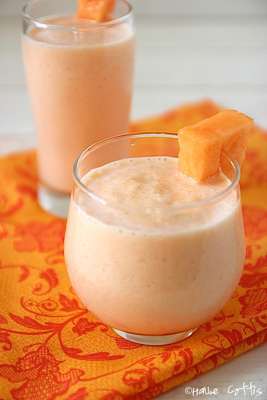 Amazing Cantaloupe Smoothie from Whole Lifestyle Nutrition
Halle's secret ingredient - which adds a little more protein to her smoothie - is the addition of a high-quality gelatin from healthy grass-fed animals. And no, she doesn't mean Jell-O. 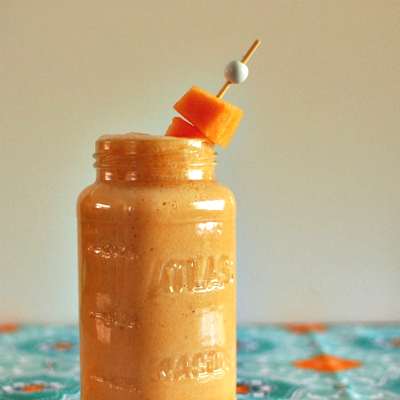 Cinnamon Cantaloupe Smoothie from SpaBettie
Adding ground cinnamon to this smoothie gives it a nice little punch of flavor. 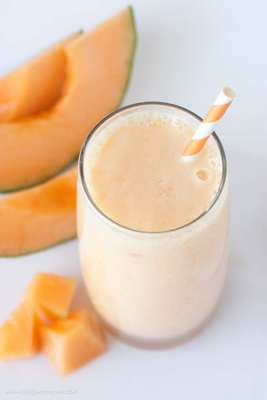 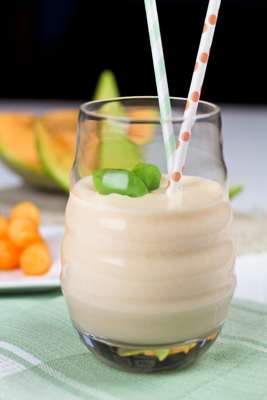 3-Ingredient High-Protein Cantaloupe Smoothie from Healthy Foodie
Cottage cheese, protein powder and cantaloupe are blended together in this protein powerhouse with *7 PointsPlus per serving. 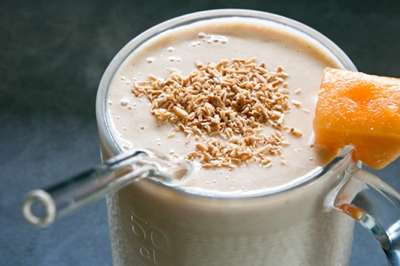 Cantaloupe Oat Smoothie from Edible Perspective
If you can stand the wait, freezing your cantaloupe chunks before blending will give you a thicker and creamier texture. 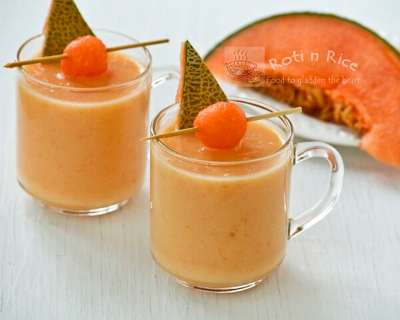 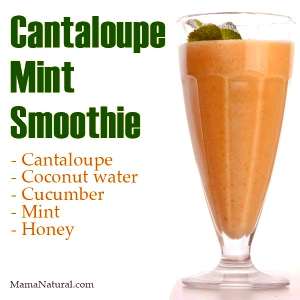 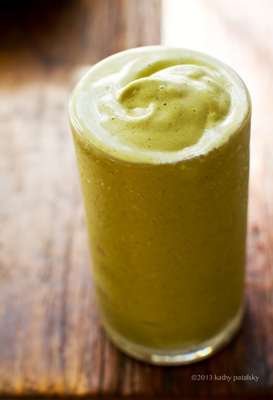 Vegan Cantaloupe Matcha Smoothie from LunchboxBunch
If you're not familiar with it, matcha is finely stone-ground, high-quality green tea. It is commonly used to dye and flavor foods, such as green tea ice cream, and is very high in antioxidants. In this case, Kathy adds it to her cantaloupe and watermelon smoothie!

"There is only one way to happiness and that is to cease worrying about things which are beyond the power of our will." ~ Epictetus

Do you have a favorite quote? I'd love for you to leave it for me in the comments!!