Jim's Weight Loss Journey is an amazing one. He finally got serious about improving his health and losing 350 pounds after being told he had only 6 months to live...

Tell Us A Little Bit About Your Weight Struggle
It has always been said life is not a race but a marathon. I do not believe that. Life is neither a marathon nor a race, but many races over time. My name is Jim Hitt. One of the biggest races of my life was my battle with weight. I have been overweight my entire adult life. Every day I seemed to gain more weight, I felt there was no end in sight, so I accepted it. I did not want to be overweight, but, like many others, I did not have willpower. 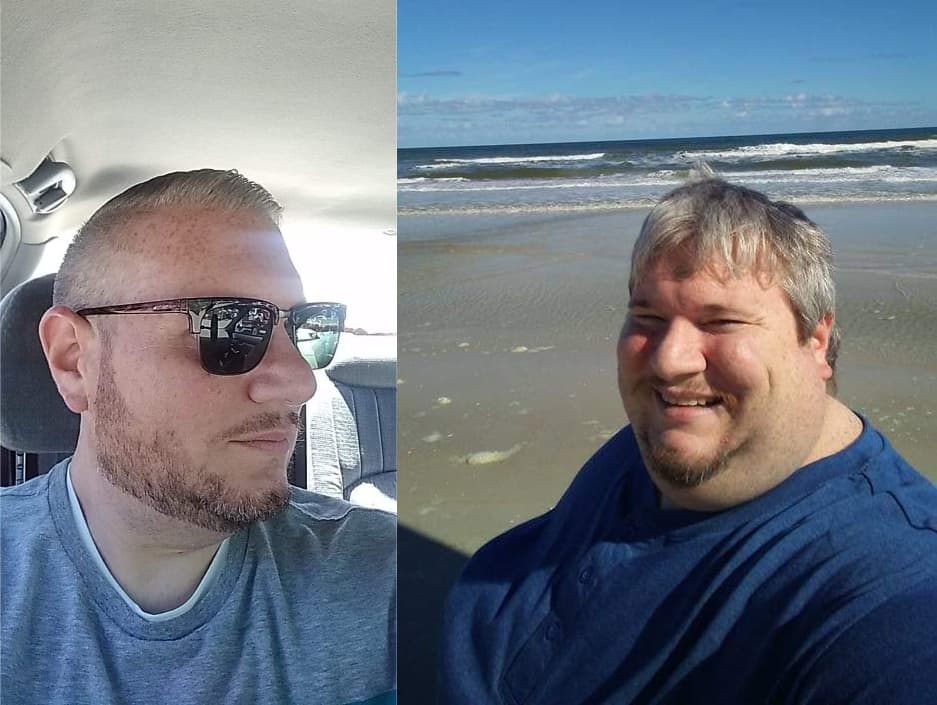 Jim H. weight loss journey, after and before

When I was 3 years old, all I wanted to be was a G.I. Joe. As I got older of course it turned into wanting to join the military. I was the kid that played army man every day, outside, inside, and with my mobile sets of toy soldiers. I saw every war movie you could think of, probably way too young. Wanting to join the military stuck with me into high school, in fact I was in the ROTC program all through high school. Going into the Army was all I wanted to do. Growing up, most kids one week want to be an astronaut, the next week they want to be a rockstar or something else. It was different for me. Serving my country meant more to me than anything else on this earth.

A few days after my country was attacked on 9/11 it was time. I was so mad and I wanted revenge. I went down to the army recruiting station to sign up. I was 17 so I was required to have parental permission to go in. It was going to be the proudest day of my life. I finally was going to be able to fulfill my biggest dream in life.

Things didn't go as planned. I found out because I was diagnosed with an eye problem "optic nerve hypoplasia" as a child, I could never go in any branch of the Military. Devastated cannot even begin to describe how I felt. It was the worst feeling I had ever felt. Anger, sorrow, and disbelief filled me like a tidal wave consuming everything in its path. I had spent the last 17 years of my life preparing and planning on one path in life, just to have it ripped from underneath me like a rug. At that point in high school I should have all really applied to multiple colleges with a career path in mind. Now I had no path, I had no plan. I could feel the walls caving in on me. I simply fell apart. My life was over.

Over time I fell deeper and deeper into depression. I no longer wanted to live, so I decided to end everything. I tried to hang myself, but I fell out of the tree before I even got the rope around the branch. I couldn't even kill myself the way I wanted. I had power over nothing. That's when I just stopped living and gave up on life.

Food became my only comfort, my only escape. Eating was the only thing I was good at, but as long as I continued eating I was able to hide the pain. I became really good at eating. I could eat more than anyone I knew.

As time went on I continued getting worse, I got highly addicted to food, and began gaining more and more weight. It was nothing for me to go to pizza hut and order 2 large pizzas. I would ask them not to cut them. Instead I would take them home, roll them up like a burrito and eat them. I would do that a couple times a week sometimes.

I would go out of my way to hide the evidence, but in reality I was hiding nothing. I just kept getting bigger and bigger. I was eating myself into a grave. 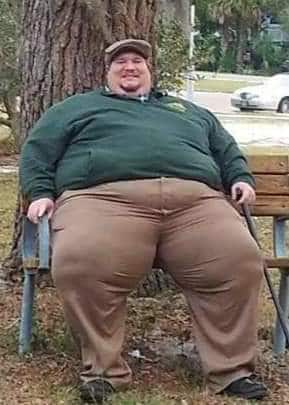 I became a pastor at a small church. Things felt like they were looking up, but eventually, I got so big I could no longer stand behind the pulpit long enough to even preach. I had to start using a wheelchair when going out, because I could no longer walk very far for fear of falling or breaking something because of my weight.

Before I knew it, my weight really began to become a problem, and the physical pain was more than I could bear. I failed at everything I tried in life, whether trying to lose weight, or even achieving any success in life. I felt I was the very definition of a Failure. Every day I asked God, "If this is all you have for me in life, then PLEASE GOD PLEASE just bring me home because I don't want to live anymore". I asked God that every single day for years.

You would have thought the breaking point was when I could no longer fit on the rides at Disney World. That was the most humiliating moment of my life, and it was in front of hundreds of people. As the ride workers were trying to help me fit in the seat I got stuck. I made the mistake of looking over my shoulder and saw people with their phones out taking pictures of me. It was one of my lowest points.

You also would have thought the breaking point was when the big and tall store did not even have clothing big enough for me in the store, or the countless comments, stares, and laughter directed towards me because I was so fat, or even when I reached 600 lbs, but it wasn't. I gave up and was just waiting to die.

Something needed to change; I just did not know where to begin. Then my life changed when my doctor told me 6 simple words, "You have 6 months to live." When hearing the doctor say this, I then realized, I was asking God everyday to take my life, but when actually faced with death I realized I did not want to die. I decided then to do something about it. I fought with every ounce of my being to stay alive, and I knew then God was not done with me yet, and that He had a plan for my life. I was at rock bottom, but there was no other direction to go but up. My "cannot" turned into I CAN! I WILL! I MUST!

The doctor said, "at this point, your only chance for survival was bariatric surgery." AKA weight loss surgery. It was a race against TIME, a race against my FUTURE, a race against my LIFE, my right to LIVE, my very right of EXISTENCE. I knew it was going to be a hard, and long race. I knew the gravity of the situation. I doubled down, I stayed the course, and towards the end when I felt like giving up I found my 2ND WIND and WON my race!

As of today, I have lost over 350 lbs and counting. I went from not being able to walk very far to now running 3 miles without stopping, and started the next race of my life.

With all the success I've had with weightloss, and lifestyle-change, I decided I want to help others overcome adversity in their life and achieve real lifestyle change. I started a career as a motivational speaker. I speak on "weight-loss, lifestyle changes, and never giving up".

The title of my program/speech is "FIND YOUR 2ND WIND!" I named it this because in high school I ran cross-country, and my coach always said "When you're towards the end of the race, exhaustion has set in, and you feel like giving up, you've got to find your 2nd wind to finish the race".

I hope others will hear my story, and see there is Hope. I hope they Find their 2nd wind and win their race! 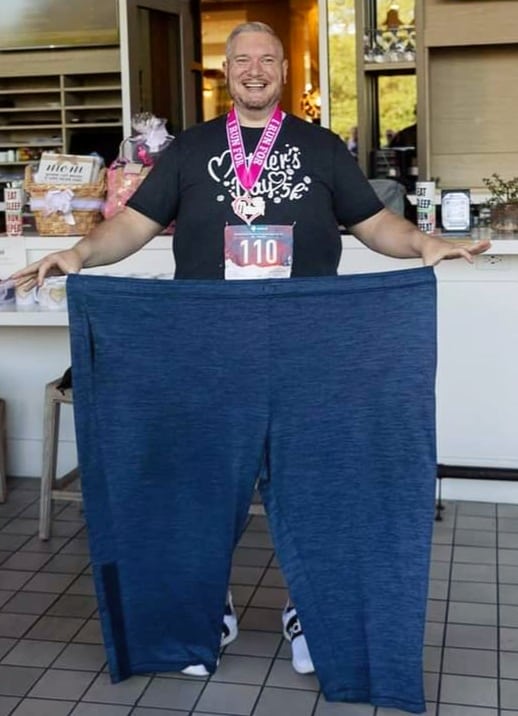 Jim holding the pants he used to wear

What Was Your Wake-Up Call Or "A-Ha Moment" That Caused You To Really Commit Yourself To Succeeding?
When my doctor gave me just 6 months to live.

How Have Your Eating Habits Changed Since Beginning Your Journey? What Did You Eat Before And What Are You Eating Now?
Portion control, counting calories and staying away from sugar as much as possible.

What Is The Difference In Your Fitness Before You Started And Now?
From wheelchair to running 3 miles without stopping.

What Has Been The Biggest Change/Payoff For You So Far?
I was able to start a new career as a motivational speaker. 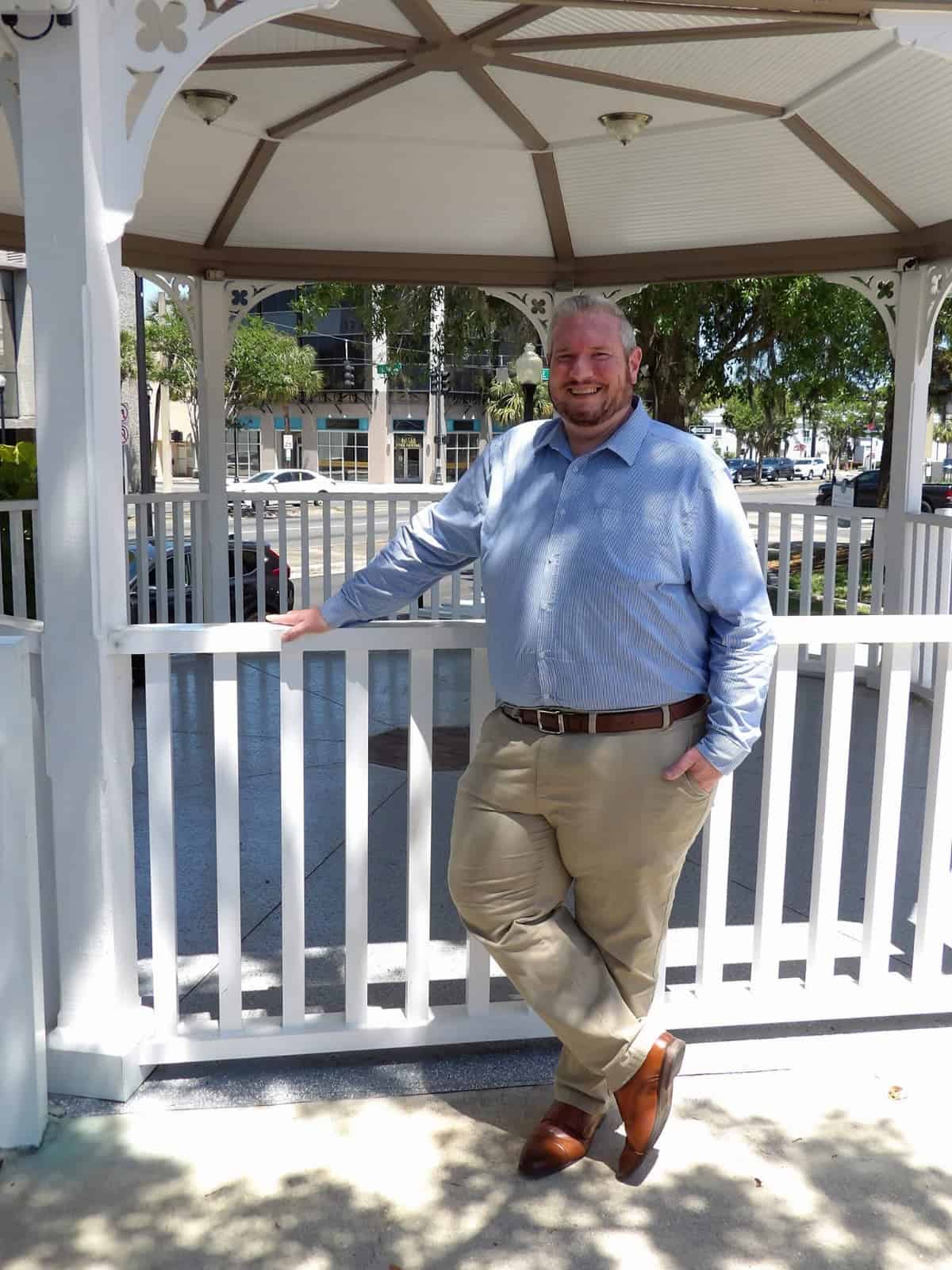 How Much Weight Have You Lost? How Long Did It Take You To Lose It?
I have lost 350 pounds in 3 years.

Any Advice and/or Words of Wisdom for Others Who Are Struggling?
When you feel like giving up, just remember your goal, and why you are doing it. FIND YOUR 2ND WIND and win your race.