As I work to simplify my cooking, eating and living, I find myself becoming a vintage cookbook collector avidly collecting old cookbooks in the process. 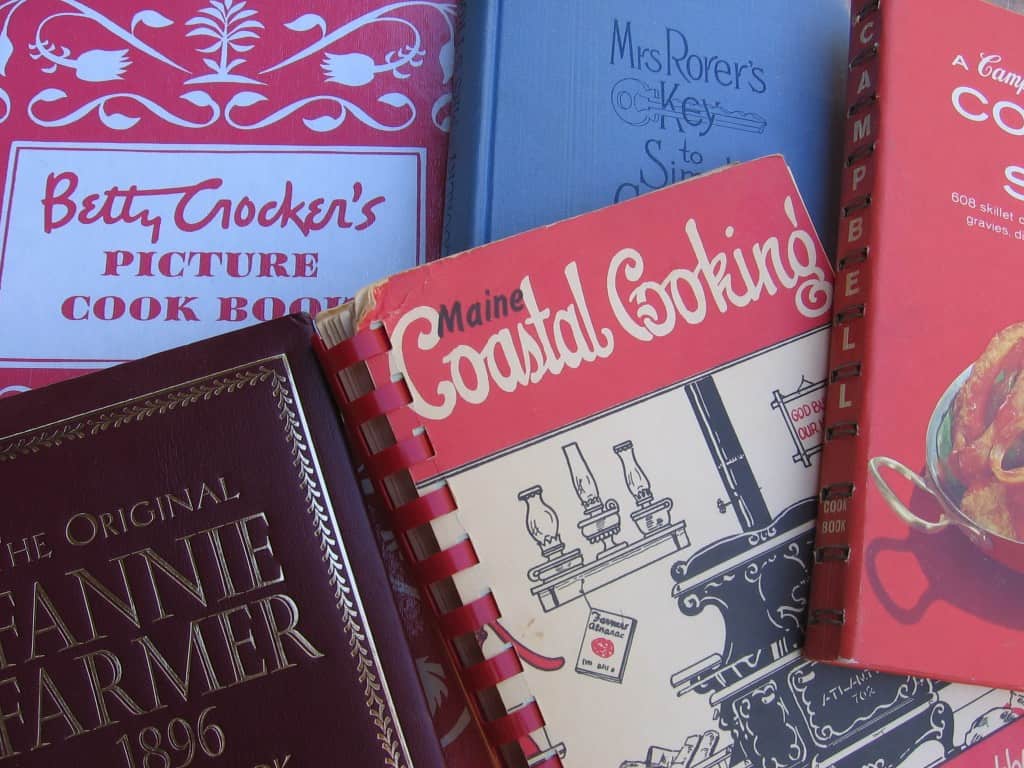 Old cookbooks are treasure troves of easy recipes for basic simple food, the kind of food I want to cook and eat these days.

I’ve been a cookbook collector for decades; a hobby shared by both my Mom and sister. I think it’s in our genes.

I recently read somewhere that the average woman owns fifteen cookbooks and that three of every ten women are cookbook collectors, so I guess we’re not alone.

But where I used to want the latest celebrity, restaurant and Food Network star releases, I now find myself drawn to the basic, old fashioned, simple recipes found within the pages of old cookbooks from decades ago.
It all began several years ago when my mom gave me a facsimile copy of the 1896 Boston Cooking-School Cookbook by Fannie Farmer that I’ve spent many hours reading.

I also recently acquired my grandmother’s recipe files when she passed away at 93-years-old. It’s a treasure trove of great old recipes written in her distinctive hand and typed on little 3×5 cards.

Most of my Nana’s recipes can be made from scratch with simple ingredients. These classic old fashioned dishes are inexpensive to make and are simply delicious.

Most are relatively easy to make, especially with all our modern kitchen appliances. And Weight Watchers friendly too.

Even if you never experiment with old recipes, they are fun to read. It’s like stepping back in time. They offer us a rare, nostalgic look into the types of foods people have eaten through the decades and methods they used to prepare them.

Ingenuity and thrift were integral part of these old recipes, since cooks could only use the ingredients and equipment they had readily available. Eating fresh berries or tomatoes in January would have been unthinkable.

If you too, are interested in getting back to basics with easy recipes for simple foods, you may want to keep you eye out for opportunities to pick up old cookbooks, especially general purpose cookbooks (like an old Fanny Farmer cookbook or old Betty Crocker’s Picture Cookbook) and old community cookbooks from the 1930s – 1970s, when cooking was simpler and more basic.

And if you have a Kindle, there are several free old cookbooks available at Amazon, such as this one, Miss Parloa’s New Cook Book, that can be fun to read.

Are you a fan of old cookbooks? Do you have a favorite? Let me know in the comments below!