I've been saying for years that losing weight and getting healthier is 95% a mental exercise. Our bodies really do want to move more and be fed nourishing food in moderate amounts. It's our minds that get in the way of our best intentions. 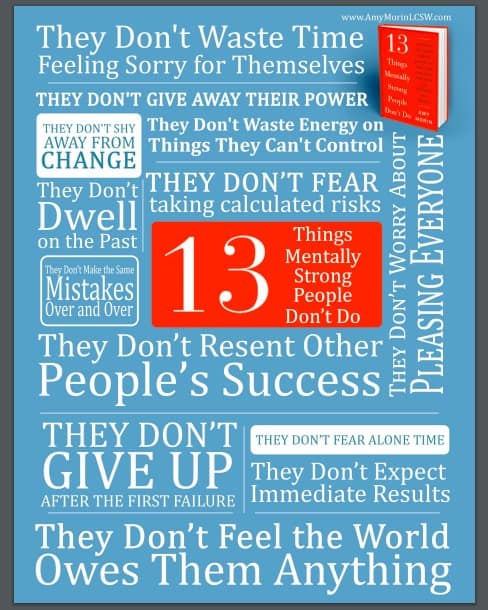 So when a recommendation for 13 Things Mentally Strong People Don't Do (affiliate link) by Amy Morin, LCSW, showed up in my inbox I was intrigued. The best selling book is based on a letter the author, a licensed clinical social worker, college psychology instructor and psychotherapist, wrote to herself during one of the lowest points of her life. In it she outlined a list of 13 things that could rob her of mental strength if she let them.

Because she found comfort in reading that letter, a few days later she published it online, hoping it would help others. Boy, did it!

After being read over 50 million times, her list was eventually expanded into a USA today and Wall Street Journal best-selling book.

Here's a summary of the list that started it all:

Mentally strong people have healthy habits. They manage their emotions, thoughts, and behaviors in ways that set them up for success in life.

1. They Don't Waste Time Feeling Sorry for Themselves

Mentally strong people don't sit around feeling sorry about their circumstances or how others have treated them. Instead, they take responsibility for their role in life and understand that life isn't always easy or fair.

2. They Don’t Give Away Their Power

They don't allow others to control them, and they don't give someone else power over them. They don’t say things like, "My boss makes me feel bad," because they understand that they are in control over their own emotions and they have a choice in how they respond.

3. They Don’t Shy Away from Change

Mentally strong people don't try to avoid change. Instead, they welcome positive change and are willing to be flexible. They understand that change is inevitable and believe in their abilities to adapt.

4. They Don't Waste Energy on Things They Can't Control

You won’t hear a mentally strong person complaining over lost luggage or traffic jams. Instead, they focus on what they can control in their lives. They recognize that sometimes, the only thing they can control is their attitude.

5. They Don’t Worry About Pleasing Everyone

Mentally strong people recognize that they don’t need to please everyone all the time. They're not afraid to say no or speak up when necessary. They strive to be kind and fair, but can handle other people being upset if they didn't make them happy.

They don't take reckless or foolish risks, but don't mind taking calculated risks. Mentally strong people spend time weighing the risks and benefits before making a big decision, and they're fully informed of the potential downsides before they take action.

7. They Don’t Dwell on the Past

Mentally strong people don't waste time dwelling on the past and wishing things could be different. They acknowledge their past and can say what they've learned from it.

However, they don't constantly relive bad experiences or fantasize about the glory days. Instead, they live for the present and plan for the future.

8. They Don't Make the Same Mistakes Over and Over

They accept responsibility for their behavior and learn from their past mistakes. As a result, they don't keep repeating those mistakes over and over. Instead, they move on and make better decisions in the future.

9. They Don't Resent Other People's Success

Mentally strong people can appreciate and celebrate other people's success in life. They don't grow jealous or feel cheated when others surpass them. Instead, they recognize that success comes with hard work, and they are willing to work hard for their own chance at success.

10. They Don't Give Up After the First Failure

They don't view failure as a reason to give up. Instead, they use failure as an opportunity to grow and improve. They are willing to keep trying until they get it right.

Mentally strong people can tolerate being alone and they don't fear silence. They aren't afraid to be alone with their thoughts and they can use downtime to be productive. They enjoy their own company and aren't dependent on others for companionship and entertainment all the time but instead can be happy alone.

12. They Don't Feel the World Owes Them Anything

They don't feel entitled to things in life. They weren't born with a mentality that others would take care of them or that the world must give them something. Instead, they look for opportunities based on their own merits.

Whether they are working on improving their health or getting a new business off the ground, mentally strong people don’t expect immediate results. Instead, they apply their skills and time to the best of their ability and understand that real change takes time.

In this 15-minute Tedx Talk video Amy shares the Secret of Becoming Mentally Strong. I especially liked the part near the end where she shares how she was able to help a man with uncontrolled diabetes develop the mental strength he needed to take back control of his health through small changes.

She ends her talk by challenging us to consider our bad mental habits and begin doing the slow steady work to change them. As I peruse the list, I know that my work lies in #9: They Don't Resent Other People's Success. I'm guilty of comparing myself to others and feeling envious of their success. NOT SOMETHING I'M PROUD Of!

So, this year I'm focusing on changing this negative habit. When I feel envy rising inside me I'm consciously working to shift my thinking. Slow and steady it is working!

What bad mental habit are you most interested in breaking?

I'd love for you to share in the comments below!

More Articles to Inspire and Encourage Your Weight Loss Journey