If you could only have one cookbook, what would it be? Which cookbook do you consider your 'go to' cookbook.

I love to cook and have lots of cookbooks, but if I could have only one, which one would I keep? I think I would hold on to Joy of Cooking: 75th Anniversary Edition - 2006 by Irma S. Rombauer, first published in 1931 with more than a dozen editions since.

Endorsed by Craig Claiborne, James Beard and Julia Child who said "it's the one book she'd keep if she could only have one English title on the shelf." with thousands of recipes and comprehensive detailed instructions for how to cook most anything, for many its the cookbook they remember mom turning to for guidance and inspiration. 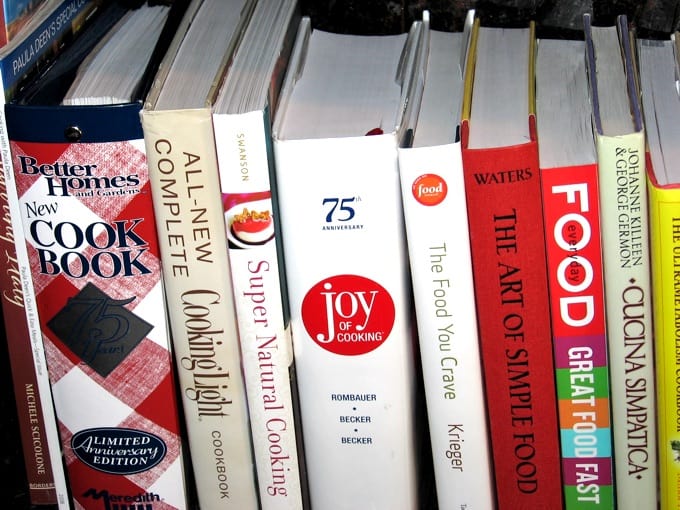 My mom never owned Joy and consequently I didn't discover it till much later in life.

Her trusted favorite is The Fannie Farmer Cookbook: Anniversary by Marion Cunningham which she received as a wedding gift, now spotted, marked and tattered from more than forty years of use.

Originally published as the 1896 Boston Cooking-School Cookbook by Fannie Merritt Farmer now in its 13th edition, this is the book I received from my grandmother when I got married.

It's what guided me in the essentials of basic cooking and helped me make meatloaf just like mom's. Containing simple straightforward recipes for all the basics and beyond, it's one I'll always cherish.

Many would choose Betty Crocker Cookbook: Everything You Need to Know to Cook Today, New Tenth Edition first released in 1950 now in its Tenth revison with its color pictures, tabs, convenient binder design and step by step instructions, as the perfect guide for how we cook today.

Would you keep the Better Homes and Garden's New Cook Book, 75th Anniversary Limited Edition, originally published in 1930, now in its 11th edition. With hundreds of photos, nutritional information for each recipe, and twenty tabbed chapters arranged alphabetically, the ring-bound version is especially convenient. It's practical and well organized with tasty recipes for how many of us live today. In addition to its comprehensive index, each section is indexed on back of its tabbed divider.

Many younger cooks might select, How To Cook Everything: Simple Recipes for Great Food by New York Times columnist, Mark Bittman. This award winning compilation of more than 1,000 recipes is often described as a more hip Joy of Cooking (affiliate link). I don't currently own How to Cook Everything but will give it a close look when the updated version is published later this year.

Is your favorite all purpose cookbook on my list? Do you have another cookbook you couldn't live without?