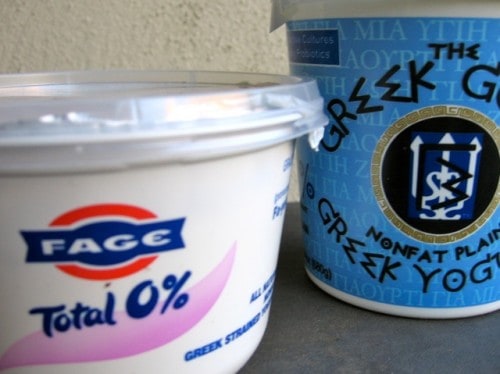 Nonfat Greek yogurt, a Weight Watchers Power Food, is a great ingredient to stock in your kitchen. It's much thicker and creamier than regular plain yogurt because it has been strained to remove the excess liquid whey. It's also much higher in protein.

According to an article in the September/October issue of Weight Watchers Magazine:

I made the switch to Greek yogurt several years ago because it's so versatile.  It took a little time for my taste buds to adjust to the tanginess, but now I love it for breakfast - plain, drizzled with maple syrup or honey, swirled with jam, or turned into Magical Yogurt Breakfast Cream. It'a also a healthy sour cream substitution in all kinds of foods from dips, to mashed potatoes to muffins and cheesecakes.

I usually buy whatever brand of nonfat Greek yogurt is available and/or least expensive when I shop, most often picking up the store brand at Fresh and Easy or Trader Joes. But there are many more brands of nonfat Greek yogurt to chose from these days. Is any one better than the others? I've never done a side-by-side taste test.

The answer to, "Which Greek yogurt is best?" seems to depend on which review you read. Cook's Illustrated, Cooking Light, Good Housekeeping, Consumer Reports, The Food Network Blog and The Huffington Post all have conducted independent Greek Yogurt Taste Tests, resulting in a variety of winners. (Are you surprised?)

Here's an interesting roundup and summary of the findings.

Greek Yogurt Taste Tests - A Review of the Reviews

CI discovered that while most Greek Yogurts were thickened by the traditional method of straining, some brands opt to skip this expensive step and, instead, fortify their yogurts with thickeners such as pectin or gelatin. It's not surprising that the two brands depending on the addition of thickeners — made by Yoplait and The Greek Gods — scored lowest in the ratings.

The winner was plain strained Olympus Traditional Greek Nonfat Yogurt. It won rave reviews for it's smooth, creamy consistency and pleasant tang.  Other recommended brands included Voskos, Brown Cow, Dannon, Oikos, and Fage. Chobani was recommended with reservations. The three lowest ranking brands that were NOT recommended were Athenos, Yoplait and The Greek Gods.

The CI Test Kitchen also compared the various yogurts when used to make dips and in baking. In the baking test, they found that brand was much less important, with all producing a tasty cheesecake.

In a 2010 Nonfat yogurt taste testing, Cooking Light named Fage their GRAND PRIZE WINNER, calling it "Beautifully thick, creamy, with a strong tangy kick." Chobani and Voskos Organic (described as a great swap for full-fat sour cream) came in next.

In a Consumer Reports yogurt taste-off of strawberry flavored yogurt, the Greek yogurts outscored the creamy brands, with Fage and Chobaniscoring excellent ratings.

The Huffington Post, put 18 different brands of Greek yogurt to a blind taste test to find the best  with both Fage 2% and 0% fat tying for the number 1 spot.

Here's a fun video with Amber of Miss Metabolism, where she gathers several of her friend for a blind taste testing of 8 plain nonfat yogurt varieties and Trader Joe's brand places first.

So, based on this completely unscientific reviews of the reviews, Fage was the clear winner, placing first or second 5 times.

I picked up containers of Fage and Greek Gods, when I was at the grocery store recently, just to do a mini assessment for myself. The Fage is incredibly richer and creamier; the Greek Gods thinner, more watery and much more sour.

Will this review significantly change my buying habits? Maybe. If I can pick up Fage on sale, I would definitely go for it. But when it's cheaper, I'm very satisfied with Fresh and Easy and Trader Joe's store brands.

Do you have a favorite nonfat Greek yogurt? 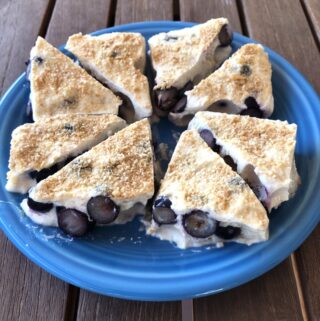 Lemon Blueberry Cheesecake Yogurt Bark
Get all the same lemon-blueberry cheesecake flavors in this simple frozen yogurt bark.
GET THE RECIPE >> 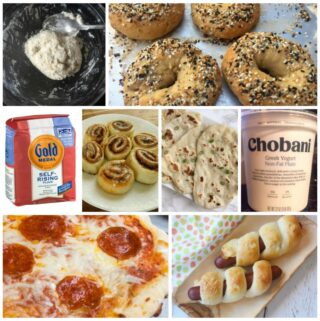 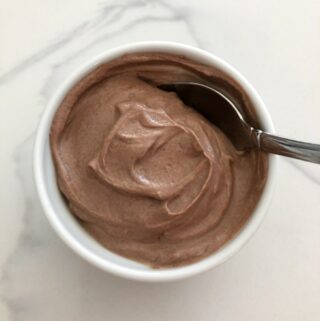 Weight Watchers Creamy Chocolate Yogurt Recipe
A nutritious and delicious indulgence that will satisfy your chocolate cravings for 0 WW Freestyle SmartPoints!
GET THE RECIPE >> 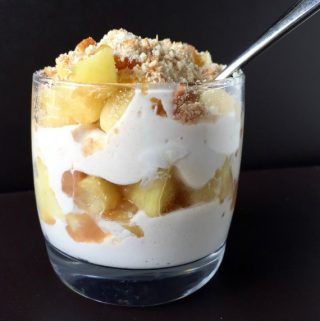 Light & Healthy Apple Pie Yogurt Parfait
Warm cinnamon scented apples layered with creamy yogurt and sprinkled with graham cracker crumbs, this apple pie parfait is a lusciously light and healthy alternative to apple pie.  This recipe would be great for breakfast, dessert or snack time. And it makes just one serving. If you prefer not to use Truvia, substitute your sweetener of choice.
GET THE RECIPE >> 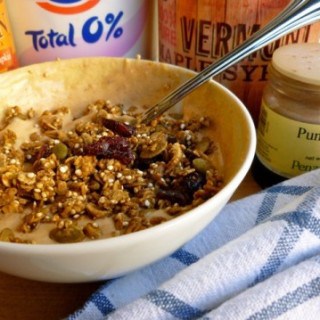 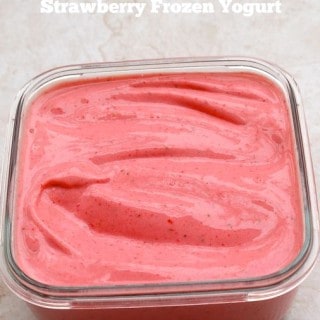 Easy 3-Ingredient Non-Fat Strawberry Frozen Yogurt Recipe
This Weight Watchers friendly strawberry frozen yogurt is an easy, healthy and delicious frozen dessert or snack you can make in minutes with minimal ingredients!
GET THE RECIPE >> 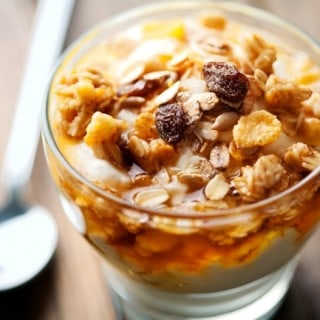 Healthy Apple Yogurt Bowl Recipe
This super simple easy healthy apple yogurt parfait is a great way to begin the day. With just 4 ingredients, it comes together in minutes and can be easily modified for different tastes.
GET THE RECIPE >> 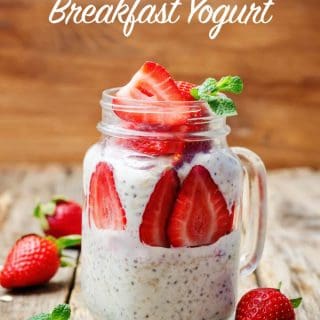 Best Breakfast Yogurt Recipe
A deliciously healthy satisfying breakfast. Best breakfast yogurt is perfect for summer and I love it best topped with fresh berries.
GET THE RECIPE >> 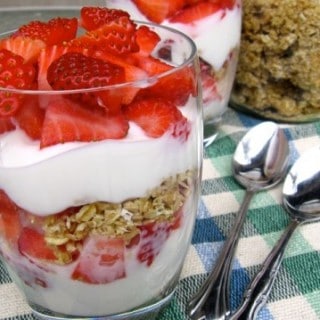 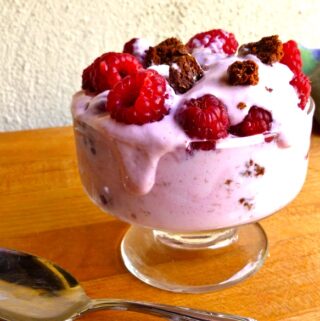 Skinny Fiber One Chocolate Raspberry Yogurt Parfait Recipe
This chocolate raspberry yogurt parfait is a sweet, yet tangy, chewy and creamy, light and luscious way to start the day!
GET THE RECIPE >> 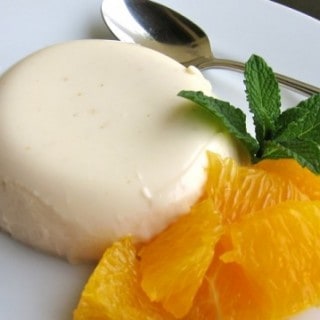 All About Making Yogurt at Home 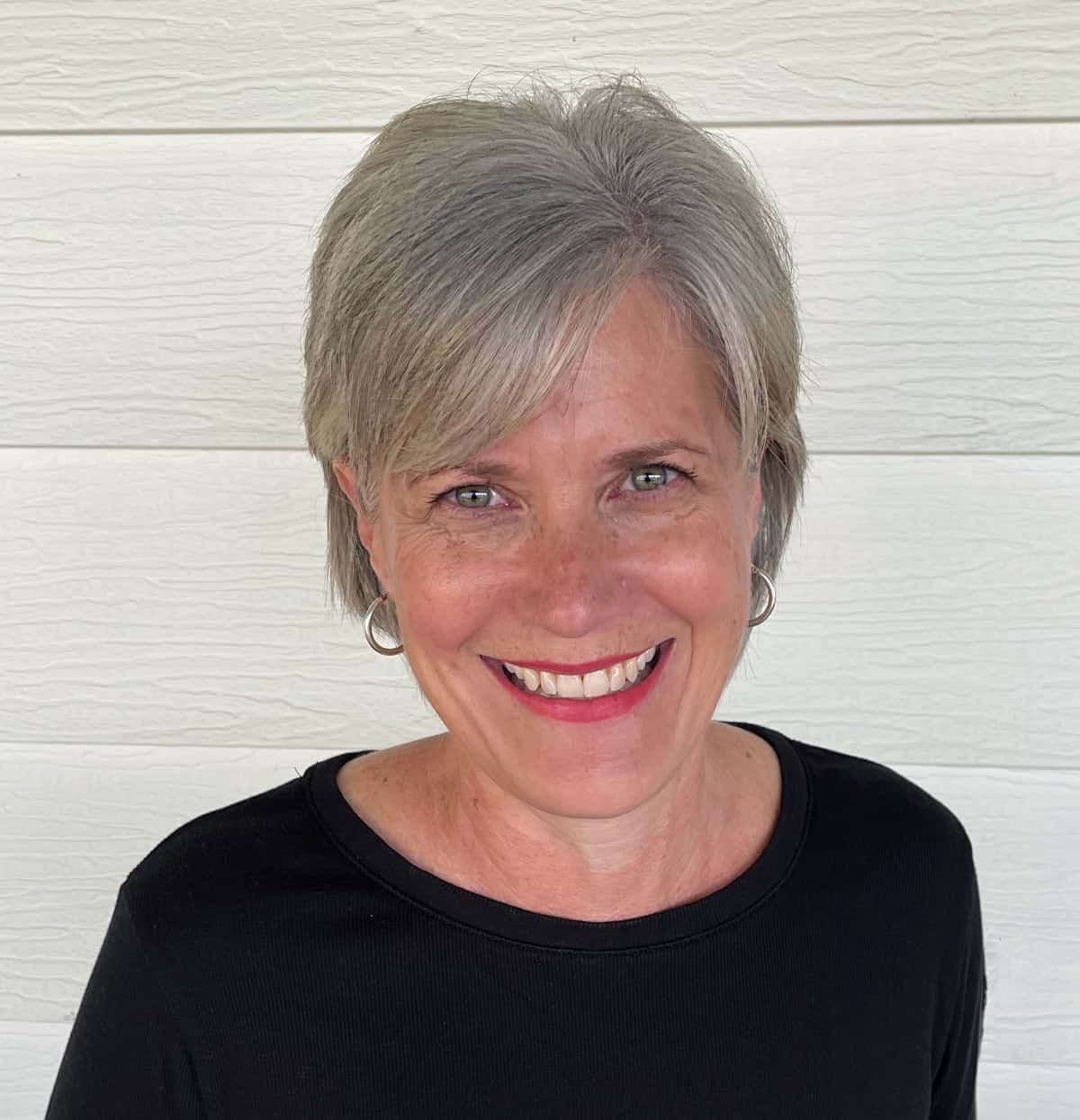